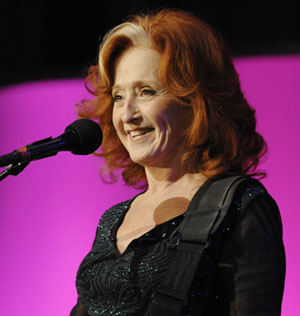 NASHVILLE - Bonnie Raitt is releasing a new album in 2012, her first in seven years.

“Slipstream,’’ out April 10, follows a long break from studio work for the Grammy-winning Rock and Roll Hall of Fame member. She lost her parents, her brother and her best friend.

“I hadn’t stopped moving in a very long time, so I really wanted to take a total break and not concentrate on making a new record or what I was going to do next,’’ Raitt said. “So that was really valuable because I waited until I was really ready to come back.’’

“Slipstream’’ is the 62-year-old’s first album since 2005’s “Souls Alike’’ and will be the first release on her own record label, Redwing Records. The 12-track album will feature four songs recorded with producer Joe Henry and his musicians, which she describes as experimental.

She says she’s thrilled with the resulting eclectic mix of blues, rock and soul that even includes a dash of reggae and Celtic sounds. She covers Bob Dylan’s “Million Miles’’ and “Standing in the Doorway’’ and Loudon Wainwright III’s “You Can’t Fail Me Now’’ as well.