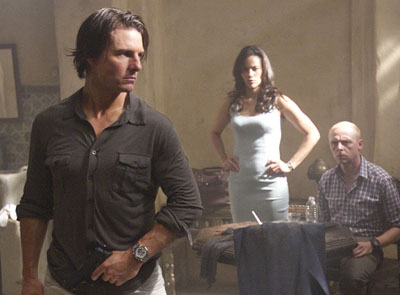 “Mission Impossible - Ghost Protocol,” the actor’s fourth outing in the action film series, made $29.4 million over three days to Sunday, and the rest on Monday, bringing its total take so far to $141.2 million, Exhibitor Relations said.

In second was “Sherlock Holmes: A Game of Shadows,” a sequel to the 2009 film about the detective created by Sir Arthur Conan Doyle. It took in $20.9 million on the third weekend since its release, or $26.9 including Monday.

In third place with $16.4 million for Friday to Sunday, or $21.5 million over four days, was “Alvin and the Chipmunks: Chipwrecked.” The latest chipmunk film is the third animated film in a series about the adorable singing critters.

Fourth place went to “The Girl with the Dragon Tattoo,” Hollywood’s adaptation of the wildly popular Stieg Larsson novel, starring Daniel Craig and Rooney Mara - which took in $14.8 million or $19.2 million including Monday.

Steven Spielberg’s “War Horse,” about the bond between a boy and his horse during World War I, cantered into fifth place with $14.4 million, or $18.1 including the extra day.

Family film “We Bought A Zoo” starring Matt Damon finished in sixth place, taking in $13.2 million, or an even $17 million over the extended weekend.

Another Spielberg film, “The Adventures of Tintin,” about an intrepid Belgian boy reporter, was seventh with $11.4 million, or $15.4 million with Monday’s takings as well.