The evolution of visionary Hirokazu Koreeda

The evolution of visionary Hirokazu Koreeda 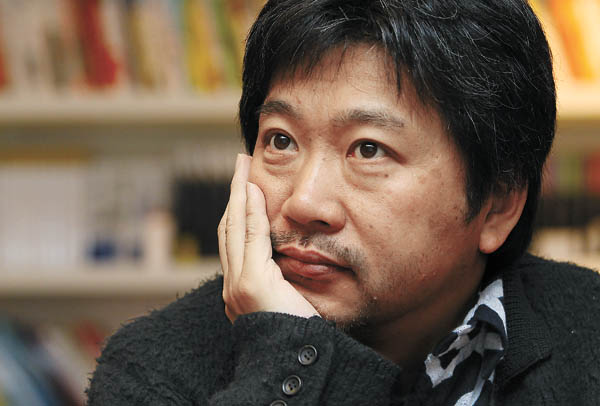 Japanese filmmaker Hirokazu Koreeda talks about his latest film, “I Wish,” which is more upbeat and lighthearted than his previous works. [YONHAP]


Japanese filmmaker Hirokazu Koreeda, 50, is relatively young to be dubbed a master - but with many of his works recognized by film festivals around the world, he has earned the title.

After a five-year stint as a television documentary producer, Koreeda transitioned to film, with his maiden project “Maborosi” (1995) winning him a Golden Osella award at the Venice Film Festival. Since then, the visionary has become a regular at the many international film festivals.

With themes centered on memory and feelings of loss for those who are left behind, this Asian filmmaker has built his own style in which tragedy and life in pain are elaborately interwoven.

His films are not for those looking to escape the dark side of the human experience, as Koreeda’s heavy realist approach sheds light on all aspects of life, even those we often don’t wish to confront, much less discuss. From children who are abandoned by their mother in “Nobody Knows” (2004) to a lonely man whose only comfort in life is an inflatable sex doll in “Air Doll” (2009), Koreeda’s characters are far from role models.

Based on a true story that is known in Japan as “the affair of four abandoned children” back in 1988, “Nobody Knows” depicts four half-siblings, all with different fathers, who are locked inside a house. The director realistically captures mistreated children’s ordeal from a third-person point of view.

The filmmaker’s creations can feel like a helping hand. He doesn’t moralize on lifestyle, but rather brings comfort to viewers by showing that they are not the only ones who may find themselves overwhelmed by life.

By writing, directing and editing most of his films by himself, Koreeda and his vision have produced many stars. Yuya Yagiara, who played the lead role in the award-winning film “Nobody Knows,” won the Best Actor Award at the Cannes Film Festival at just 14 years of age in 2004. He became the youngest actor to win the award.

His recent film “I Wish” tells a story of two young brothers who become separated after their parents divorce. The brothers wish to reunite but they know that is unlikely. Meanwhile, the completion of a new bullet train is announced, and the elder brother Koichi (Koki Maeda) comes to believe that his wish will be granted if he gets a glimpse of the moment when two bullet trains pass in opposite directions.

From that point on, Koichi, his younger brother Ryu (Ohshiro Maeda) and their friends plan a trip to the site where they can witness this transportation eclipse. Each is driven by a different wish. To raise funds, they rifle through coin-return slots on vending machines and sell possessions such as comic books and action figures.

First premiered at the 16th Busan International Film Festival last year in Korea, “I Wish” is said to be much brighter than Koreeda’s previous works.

“We shot the film in Kyushu [Japan] for about one and a half months in the summer [of 2010]. It was like revisiting my childhood again,” the director said.

The Korea JoongAng Daily recently sat down with Koreeda, who visited Seoul for two days to promote the film. The interview dived into a variety of topics ranging from what prompted Koreeda to become a filmmaker after studying literature at an elite college to changes in his latest films. Koreeda spoke through an interpreter. The following are excerpts from the interview:


Q. It seems as though you are particularly interested in stories about families. Your past work “Nobody Knows” is about abandoned children and “Still Walking” (2008) details a family reunion after one of its members passes away. Why do you focus on this theme?

A. Part of the reason is that I like home dramas. I actually had no children when I was working on “Nobody Knows,” but I became a father after that and my child just turned four. Probably the way I see children has changed and that must be reflected in this film. That’s what people say after watching “I Wish.” It’s a pleasure that I can grow with my films.

What was it like to work with these seven different child actors in “I Wish”? I’m sure you had some episodes behind the scenes.

I felt like I was a homeroom teacher at an elementary school. When they get together, one of them is tired, another is sleepy and the other is having a bloody nose. When they are okay, they argue with each other. My hardest task was to encourage them to have the same level of motivation throughout the production period.

I heard you had to change the whole plot after you met the Maeda brothers, who appear in the film as brothers as well.

I was planning a child version of “Romeo and Juliet,” but the Maeda brothers changed my mind. They were so attractive, especially the younger brother. So I changed the plot into a tale of separated siblings.

That was the original premise of this film but I didn’t want to make it so blatant. I was thinking about a story that briefly features bullet trains at the end. If they didn’t like the idea, I was going to drop the project, but they weren’t bothered.

From what I’ve read, you developed news clippings of four abandoned children into a script after you listened to “Jewel,” sung by Japanese singer Tate Takako. Some filmmakers think of film scores as part of their movies. How about you?

I was working on the screenplay of “Nobody Knows” and I got to meet Takako. I thought it would be good if his voice were inserted into a scene in which children are on their way to bury the youngest sister, as if the voice embraces the children. Of course, I think film scores are important but I only use them on occasion. “I Wish” was different. I inserted scores whenever the actors delivered their lines. I wanted music that could back up children as they hit the road. It’s is all about children, trains and travel. Then, Quruli [a Japanese music group formed in 1996] hit my mind.

On the day when “I Wish” was first shown to the Korean press, you explained to reporters that in this film your dark side is overshadowed by children’s bright sides. Does it mean that you’re a person with more of a dark side?

I think I’m dark - but it doesn’t mean that I have a pessimistic viewpoint on life. I’m interested in people who lose their beloved ones and, yes, in that sense I’m dark. While working on this film, however, I was inspired by the children’s positive energy.

You started your career as a television documentary producer. What made you transition from documentaries to feature films?

I don’t think they are different. It’s a long story, but I will tell you briefly. I wanted to make a feature film from the start but you can’t make one of those right away. You need at least more than a decade’s worth of staff members when working on a film, but to do documentaries you just need just four or five people.

So I chose documentaries because I didn’t have many friends. [Laughs.] I got a job at a production company. And I found myself enjoying making documentaries. I think I learned a lot by making them.

The March earthquake last year affected the lives of thousands of Japanese including many artists. How did you see the earthquake from a director’s point of view?

I visited earthquake-stricken regions about three weeks after the day of the earthquake. I paid a second visit in May [of last year.] I also brought a camera with me and captured scenes of the regions. But I became speechless because it was so devastated. ... I don’t think I’ll make a film about the earthquake. It will take time for me to develop my feelings into a film any way.

* Education: BA in literature from Waseda University in Tokyo