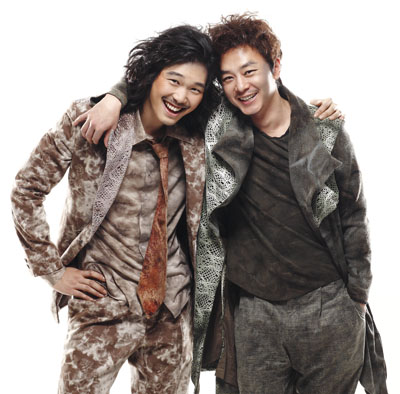 Eungbo (Yoon Jeong-seob), left, and Mungye (Lee Won-gye) are the two main characters in the play “Poongchan Nosuk,” which depicts the plight of mixed-race people in Korea. The play runs from Jan. 18 to Feb. 12 at Namsan Arts Center. Provided by the theater

Korea is fast becoming a multiethnic society, but Korean people are not always ready for the challenges that this new reality presents. Discrimination against immigrants and marriage migrants continues to be particularly strong, and their children often bear the brunt of the burden but have few tools for addressing the problems. Yet many Koreans are still not aware of the discrimination they face or of the hurt it causes.

Now, a new production by Namsan Arts Center hopes to illuminate these problems while offering possible ways to address them.

“Poongchan Nosuk,” which premieres at the center Jan. 18, follows two friends, Eungbo and Mungye, who live in a community of villages inhabited by families from different nations. Conflict arises when the villagers decide they need a leader and set out to devise a social structure for their community.

“Poongchan Nosuk” is translated literally as “sleeping in the dew” and “eating wind.” A more liberal translation refers to a person who chooses to live like a nomad, outside of his or her comfort zone, as many immigrants do.

“It’s a very timely issue to address right now,” said Choi Yeo-jung of Namsan Arts Center’s public relations team. “Not just because it’s happening right now, but because it seems that it’s going to continue and become more serious in the future.”

She said that is why the time and location of the play’s setting are vague.

The play’s author, Kim Ji-hun, said he didn’t write the play to criticize the government or deliver a political message. Nor was he trying to elicit an emotional reaction from the audience.

The sensitive nature of the issues raised in the play prompted the producers to seek feedback early in the production process. Last July, they offered a read-through of the play that was spread over three nights and attended by theater critics and the general public.

“We were worried that people would have a hard time following the story because it happens in an imagined time period with imaginary people,” Choi said. “But they understood it far better than we expected, which helped us create more clear characters.”

If the premiere goes well, she said, they may eventually try to bring the production to audiences overseas.

*“Poongchan Nosuk” will run from Jan. 18 to Feb. 12 at Namsan Arts Center in Jung District, central Seoul. Performances start at 7 p.m. on Tuesdays to Fridays and at 3 p.m. on Saturdays, Sundays and holidays. Tickets cost 25,000 won for adults and 15,000 won for children and teens. The show, which is presented in Korean, has a running time of 3 hours and 50 minutes with a 15-minute intermission. Go to Myeongdong Station, line No. 4, exit 1. For more information, visit www.nsartscenter.or.kr or call (02) 758-2150.