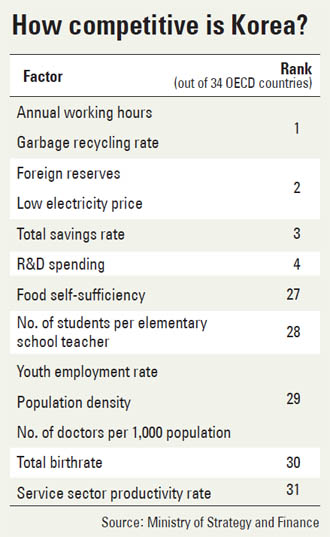 Korea still trails other advanced countries in terms of social integration and social capital despite being economically competitive, raising concern about its increasingly polarized society, a recent report showed.

Growth rate, labor productivity and other economic indicators remained stable or showed signs of improvement in 2010, but a range of non-economic factors were far from satisfactory, the Ministry of Strategy and Finance said yesterday.

Its report, released this week, analyzed Korea’s competitiveness in 2010 through comparison to 33 other Organization of Economic Cooperation and Development (OECD) member nations.

“We have efficiently dealt with the recent global financial crisis, which allowed our economic indicators to improve,” said Yoo Hyung-chul, an official from the ministry’s economic policy department. “But we still need to improve other areas such as social integration.” 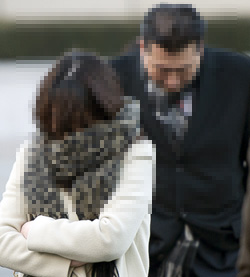 The ministry’s report, the second of its kind in as many years, is based on 259 indicators in four different areas: economy, social integration, environment and infrastructure.

Korea’s growth rate ranked second in the OECD as of 2010, up three notches from 2009. The respective global market shares of its export items also saw it positioned eighth-highest in the group, up from 10th in 2009. Korea’s labor productivity also shot up over the same period.

Meanwhile, the country’s per-capita gross domestic product moved up to 22nd from 25th, while its short-term debt ratio remained in poor shape at 16th lowest in the organization, but was nonetheless an improvement of nine places from 2009.

Additionally, its rating in terms of exchange rate stability improved to 23rd while its household debt rating moved up to 18th.

Yet despite various indicators having gained ground in reflection of the country’s slowly stabilizing macro-economy, when it comes to social equality, Korea has far to go to catch up with countries like the U.S.

In fact, the report revealed how the gap between haves and haves-not has widened. Income inequality based on the Gini coefficient put Korea 20th in the OECD list, having slipped two places from 2009.

Polarization has also widened between the country’s manufacturing and service industries, for which productivity levels stood at 24th and 31st, respectively.

The gap between large and small companies also increased over the 12-month period. In 2009, the operating profit-to-sales ratio for large companies was 6.5 percent, but this rose to 7.8 percent in 2010. Small and medium enterprises were less fortunate as this barometer edged down to 5.5 percent from 5.6 percent.

Big business also saw its collective debt ratio fall to 86.3 percent from 96.1 percent, while smaller firms struggled to reel it in despite a drop to 134.4 percent from 136.9 percent.

Female economic participation ranked 30th among 34 advanced nations and their salaries. Compared to men’s income, it was the lowest.

However, Korea powered ahead in areas of future-oriented investment. For example, its spending on research and development programs as a percentage of gross domestic product yielded the third-highest rate in the OECD.

Also, the ratio of university graduates from engineering and natural sciences departments was the second-highest when calculated as a percentage of all graduates.

A key problem, even in academia, however, was a dearth of originality.

This was suggested by data showing that Korean thesis papers are rarely quoted compared to other nations in the organization, casting Korea into a lowly 22nd in this field.

And this comes despite Korea having one of the best-educated populations in the OECD. Some 63 percent of its population between the ages of 25 and 34 were found to have university diplomas in 2010, much higher than the OECD average of 39 percent.

In reality, the nation’s overall competitiveness in the education sector was low. In Korea, each elementary school teacher is in charge of 22.5 students, the third-largest class size among the OECD nations. The average is 15.5 students per teacher.

Nonetheless, the children are relatively well taken-care of. Korea’s public education spending per student to GDP was 7.5 percent, making it the second-highest after Iceland.