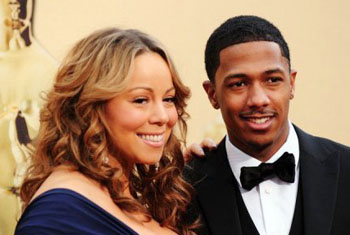 Singer Mariah Carey asked fans Wednesday to pray for her rap artist and actor husband Nick Cannon after he was admitted to a hospital suffering from mild kidney failure.

Tweeting a picture of her cuddled up with Cannon in his hospital bed, feeding him a drink through a straw, the Grammy-winning artist said the situation was “serious” but said he was fighting to recover.

“Please pray for Nick as he’s fighting to recover from a mild kidney failure,” she said in a Twitter message.

The tweet was accompanied by a picture of the couple which showed Cannon wearing a beanie hat, swaddled beneath a pillow.

Elaborating on her Web site, Carey joked that the situation was a role reversal from last year, when she gave birth to their twins.

“Last year it was me attached to the machines (after having dembabies) and Nick was there with me through it, and now here we are,” she wrote from Aspen, Colorado, where the couple was on holiday when the health scare occurred.

“We’re trying to be as festive as possible under the circumstances but please keep Nick in your thoughts because this is very painful. They tried to kick me out of the hospital but here I am pon de [sic] bed with Mr. C.

“We’re doing OK but we’re “straaaaaanded in Aspen. #DramaticDivaPlace (I know, we could be in a lot worse places) but the truth is as long as we’re together, we’re OK.

“I’m not trying to make light out of the situation because it’s a serious moment that’s very tough on all of us so please keep us and our family in your prayers.”

Carey and Cannon married in the Bahamas in April 2008. It was the second marriage for Carey, whose five-year union to legendary music producer Tony Mottola ended in divorce in 1998.