KDB to offer stake in 2012 en route to privatization

KDB to offer stake in 2012 en route to privatization 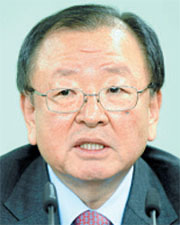 However, the size of the stake to be publicly offered this year is still undecided, with Kang deferring to the government on whether to sell a 10 percent stake, as previously mentioned in a rough outline for KDB’s privatization plan, or change the amount in view of market conditions.

In a meeting with the press yesterday in Yeouido, western Seoul, Kang Man-soo said KDB’s first step to privatization will be through an initial public offering (IPO) this year, but refrained from specifying the size of the stake.

“The goal of privatization is for the company in question to gain operational autonomy,” said Kang. “The government decided that an IPO would be the most convincing method to achieve this goal.”

State-run Korea Finance Corporation owns a 91 percent stake in KDB and the government owns the rest.

Kang said several pending factors could affect the terms of the offering.

“Although the government’s previous plans for KDB’s privatization called for a 10 percent stake to be made public by 2012, market conditions could lead the government to change the size of the offering,” he said.

“Local investors alone can handle a stake sale of 10 or 30 percent without too much trouble.”

With presidential elections scheduled for December, KDB Financial Group is seemingly opting for an IPO to hurry the process along as privatization could become difficult under a new administration next year.

Under Korean law, the government must publicly sell a part of its stake in KDB before May 2014.

Meanwhile, the state-owned bank plans to continue bulking up to fetch a better price when it launches on the stock market. KDB is in talks to acquire HSBC Korea’s retail banking business in Seoul and expand its operations to 100 branches nationwide this year.

Kang said KDB is still seeking further M&A candidates both in Korea and abroad, but refrained from elaborating on the HSBC deal.