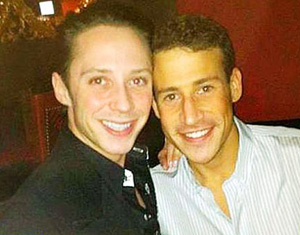 The two are planning a July wedding, but Weir said in a Twitter post on Saturday that “all the official stuff is done now!’’ He thanked fans in another post late Monday, saying the well wishes mean a lot.

“I am so happy to have found my match,’’ the two-time Olympian said in a statement. “Marrying Victor has been the greatest moment in my life, and I will work very hard to make him proud and happy.’’

Though Weir has not competed since the Vancouver Olympics, where he finished sixth, he has not ruled out a comeback for the 2014 Games in Sochi, Russia.

Weir came out last January in his autobiography, “Welcome to My World.’’ He had previously avoided questions about his sexuality, saying he wanted people to see him “for who I am, not what I am.’’