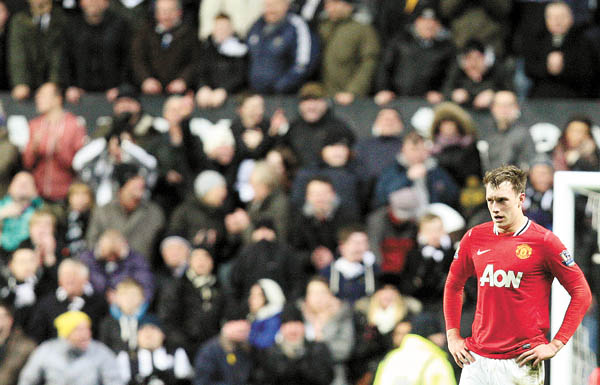 A stunned Ferguson saw his side suffer a comprehensive 3-0 defeat at Newcastle, condemning them to back-to-back league losses for the first time in 10 months to remain in second, three points adrift of Roberto Mancini’s leaders, while holding the same advantage over Tottenham Hotspur, in third.

The Manchester rivals meet in the FA Cup this weekend, but Ferguson’s thoughts remain on his attempts to stretch City’s 44-year wait for the English top flight crown.

“Of course it is advantage City,” Ferguson said. “We had our opportunity, they played last night and won, so it’s advantage to them.

“The one plus for me is we had two or three players back, and maybe that can make the difference. It’s not a time to panic. We have the patience and experience to cope.”

Ferguson insists his defending champions’ title know-how will help them in the long run this season, and he added: “Losing a game down the years, you don’t want it to happen, but it does, and you see that with some of the results lately. But we’ll take the show on the road, particularly in March and April.”

Phil Jones’ embarrassing injury-time own goal completed United’s misery, after stunning goals in each half from Demba Ba and Yohan Cabaye set Newcastle on the way to a first home win in two months to cement their hold on seventh place.

Wayne Rooney failed to shine in his return after a one-game suspension and hefty fine for flouting a club curfew over Christmas, as United was shut out for the first time this season.

“We started reasonably well, and we had a good chance when Wayne was through and the ball ran under his foot,” Ferguson said.

“But then Newcastle scored a fantastic goal, and it really picked everyone up in the stadium. They got really aggressive against us and made it difficult.

“It was a marvelous volley and then the second goal just before halftime was a killer. We didn’t make enough of our possession. It was one of those nights.

Newcastle loses 15-goal top-scorer Ba and the equally influential midfielder Cheik Tiote to African Cup of Nations duty for the next month.

Manager Alan Pardew admitted: “I’m not going to hide the fact that Demba and Cheik were our two outstanding players tonight, and we’re going to miss them while they’re away.

“In addition to his goal, Demba’s all-round display was outstanding, and it was as good a display as he’s produced since he’s been here.

“But you have to say what a way to sign off, and we look forward to welcoming them back in six or so games’ time. It’s a great result. We stayed on top of United and didn’t let them play.”