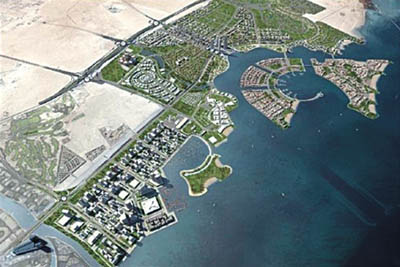 A bird’s-eye view plan of the project

Samsung C&T Corporation has won a major order to build roads in Qatar, the company said yesterday as it continues on its mission to become a global construction powerhouse.

The construction unit bagged the project worth $296 million from Lusail Real Estate Development Company, a property company in the sovereign Arab state, it said.

Under the contract, Samsung C&T will help build infrastructure for Lusail, a new 35-square kilometer city in the emirate, 22 kilometers north of the capital Doha.

Samsung will be responsible for building 10.7 kilometers of roads, 1.5 kilometers of which will lie underground. The company expects the project will take 30 months to complete.

The company was selected as the final bidder after beating off 25 rivals. It is believed to have won the deal in recognition of its ability to execute large projects and because of its vast experience.

The company is currently building underground roads in Salam in Abu Dhabi, the capital of the United Arab Emirates, and underground expressways in Singapore’s Marina Bay area.

The latest deal follows hot on the heels of Samsung winning another contract last November worth $89.5 million to build bridges connecting islands in Lusail, which is believed to have helped it net the second order.

Samsung also appears to be quickly establishing a foothold in Qatar, where demand for infrastructure projects is growing ahead of its hosting of the FIFA World Cup in 2022. Samsung expects large orders to follow in the foreseeable future.

“Based on our experience and technological prowess, as proven in various construction and civil engineering projects overseas, Samsung C&T is securing its place in the Qatari market,” an official at the company said.

Samsung has been expanding its business in the Middle East since it completed work as the primary contractor for the world’s tallest building, the Burj Khalifa, in Dubai, UAE, in 2010.