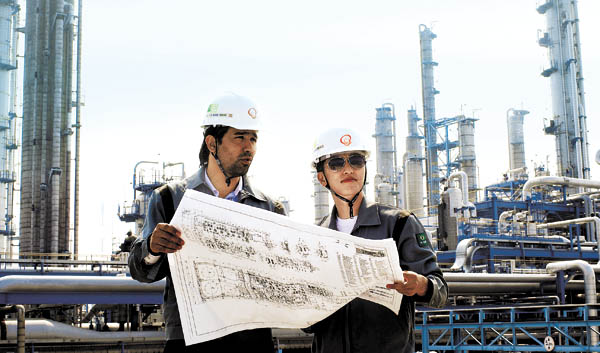 Posco Engineering and Construction, Hyundai Engineering, STX Heavy Industries and other major players have greeted the New Year in ebullient spirits after seeing a boom in orders from the Middle East in 2011.

The country’s overseas construction orders reached $59.1 billion last year but are expected to jump to $70 billion this year, putting it on par with the situation two years ago, according to a report by the International Contractors Association of Korea.

The domestic industry enjoyed a lucrative 2010 because of a nuclear power plant order from the United Arab Emirates worth $18.6 billion. 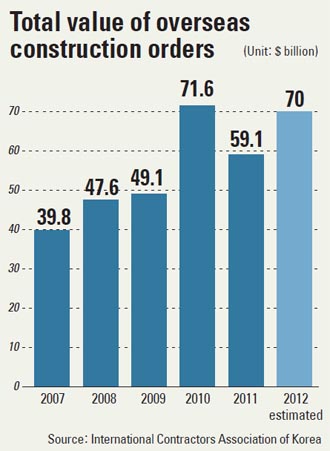 To give a sense of scale, this order alone was worth one-third more than all overseas projects won by Korean companies in 1966, when they first ventured outside the country.

Last year, the Middle East represented the largest market for local firms, which netted projects worth a total of $29.5 billion.

By country, demand was highest in Saudi Arabia, followed by Brazil, Iraq, Vietnam and Singapore.

“This year, we expect orders from the Middle East to increase,” said Kim Tae-yup, an official from the association.

“The countries there are trying to develop infrastructure and promote restoration works.”

The latest data by the Ministry of Knowledge Economy also showed that overseas orders for industrial plants received by Korean builders rose to a new all-time high last year of $64.98 billion as demand surged, mainly in developing countries in the Middle East and South America.

The ministry said volume is expected to grow in the next 12 months due in part to the 2022 FIFA World Cup in Qatar and an ongoing construction boom in the Middle East sparked by efforts to rebuild Libya in the wake of last year’s civil war.

Local construction firms have been aggressively venturing overseas lately as over-saturation at home makes their profit-chasing more of a challenge.

Indeed, the local construction market has been stagnating, as it remains anchored to the gloom and doom pervading an equally lifeless real estate market.

Global financial woes triggered by the debt crisis in the European Union have also affected the local industry, putting many construction projects on hold until the world economy recovers.

Local firms have been stressing the need to focus on receiving overseas plant orders, especially from the Middle East with its tempting oil riches, as well as Northern Africa and Latin America. Last year, Samsung Engineering even increased its number of foreign employees to 1,000.

Experts predict Korean firms will continue winning overseas orders by virtue of their competitive advantage in terms of building industrial plants and facilities, including chemical and gas plants, steel plants and oil refineries.

Last year, no less than 72 percent of overseas orders were for building industrial plants.

“Competition is fierce when it comes to winning engineering and architecture orders because there are countries like China that offer bids with low labor prices,” said an industry official.

“Korean construction firms have refocused their businesses on industrial plants as a means to be more competitive.”

There are also financial hurdles to face as Korean companies need to finance the projects in a climate of tightening credit and liquidity, according to the official.