For most Indians, small is beautiful

For most Indians, small is beautiful 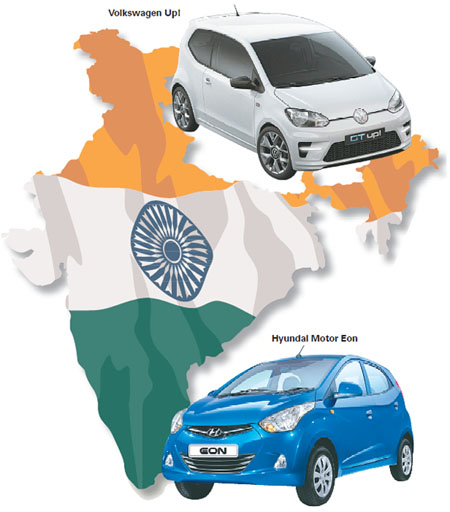 NEW DELHI - India’s city car market is becoming increasingly competitive as automakers see more consumers moving to the segment, a trend highlighted at the Delhi Auto Show that opens to the public this weekend.

Small cars are the backbone of India’s fast-growing auto industry, accounting for more than 70 percent of the market, the world’s sixth-largest by sales last year.

Leading automakers there such as Maruti Suzuki, Tata Motors and Hyundai Motor have launched or plan to introduce city cars into the compact low segment, which has been dominated by Maruti Suzuki’s Alto, the bestselling car in the country.

“Real estate prices are going up and there are not enough parking spaces,” said Karthick Annamalai, business head of auto portal Vicky.in, explaining why small cars are so popular in India. “Fuel prices are among the highest in the world so consumers [here] prefer small cars.”

Asked why local consumers are won over by vehicles with high ceilings, like Hyundai’s, he pointed to the country’s population of more than one billion.

“Because it means as many people or luggage can fit inside. People want the cabin to be as big as possible,” he said.

Volkswagen recently announced that it plans to introduce three versions of its Up model in India - a three- and five -door hatchback and a minivan - by the end of 2013 or early 2014. The model debuted at the Frankfurt Motor Show last year.

“There are huge opportunities to expand in India,” Volkswagen Group chief representative John Chacko told the Press Trust of India on Wednesday.

Meanwhile, Skoda, a Czech subsidiary of Volkswagen, intends to introduce its Citigo city car to the market. As this is based on the same basic platform as the Up, Skoda’s entrant is expected to be more upscale to avoid direct competition, industry insiders said.

Volkswagen is the No. 4 automaker in India in terms of market share, trailing Maruti Suzuki, Hyundai and Tata, in that order. Although it was a late entrant compared to Hyundai and Suzuki, it saw passenger car sales jump 122.2 percent to 98,000 units from January to November 2011 to claim a 5.5 percent share of the market.

Nissan also plans to enter the compact low market and is now developing a city car based on its Micra. The Japanese automaker intends to launch the model this year. 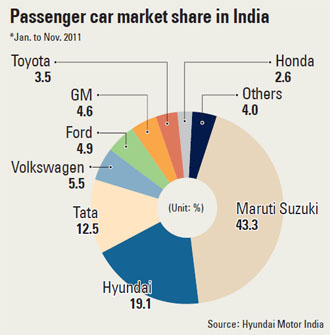 Toyota Motor, the seventh-biggest carmaker in India in terms of market share, also had a successful year in 2011 as its sales skyrocketed 533 percent to 63,000 units in the first 11 months. This led its market share to climb to 3.5 percent.

Ford is also preparing to throw its hat in the ring by unveiling compact low and midrange cars priced at around 300,000 rupees this year or next, it said. As its Figo is steadily losing market share to rivals, the U.S. automaker is trying to develop a cheaper model to regain traction.

“The majority of our growth now in terms of production facility and volume will focus on serving the Asia-Pacific customers, starting with India,” he said.

India will be among the first to get the EcoSport - which will be built at Ford’s Chennai plant - along with several South American countries.

“Hyundai Motor is cost competitive and can develop models most efficiently,” said Cho Su-hong, an analyst at Woori Investment & Securities.

Hyundai can build 600,000 vehicles a year at its Chennai plant, but it has no immediate plans to increase its manufacturing capacity, it said.