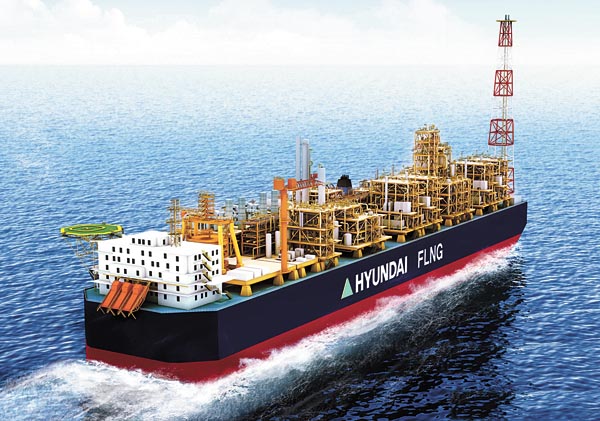 The world’s No.1 shipbuilder announced yesterday that it has won approval in principle from Norway’s DNV Maritime, a prestigious classification society, for the vessel, dubbed “Hyundai FLNG” (floating liquefied natural gas).

The ship ranks as an LNG-FPSO, a floating offshore facility capable of extracting natural gas from gas fields in deep water and preprocessing it at minus 163 degrees. The facility also stores and unloads gas to LNG carriers.

With its original development, Hyundai becomes the only shipbuilder in the world able to independently conduct EPIC, an acronym for engineering, procurement, installation and commissioning that covers the key processes in manufacturing. The shipbuilder can also design the vessel’s topside and hull.

A typical LNG-FPSO comprises a hull for gas storage and a topside, where the gas is preprocessed, liquefied and unloaded.

In order to win approval for the design of its latest vessel, Hyundai participated in a model test in the Netherlands late last year. Hyundai FLNG not only acquired a safety guarantee but flashed its impressive operation rate and mooring ability.

Due to runaway oil prices and the massive earthquake in Japan last March, global demand for natural gas is on the rise. The shipbuilding industry forecasts that the LNG-FPSO market will keep expanding because the floating facility can be strategically used at 2,400 sites worldwide.

“The Hyundai FLNG is economical and efficient,” said Kim Yoon-choon, an executive at the company.

The shipbuilder has much experience in the FPSO business, having completed construction on 11 FPSOs. It also has accumulated know-how on executing LNG projects, and won an LNG-FSRU order from Norway’sHoegh last June.