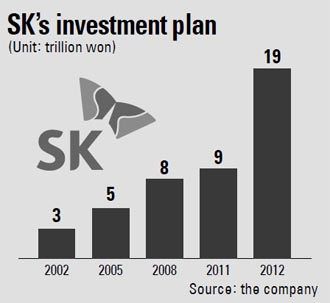 As the family of Chairman Chey Tae-won continues to be probed on suspicion of embezzling company funds, SK Group has unveiled its largest investment plan to date.

Korea’s third-largest conglomerate by assets belatedly released its management plan for 2012 yesterday. The delay is believed to have been caused by the recent arrest of Vice Chairman Chey Jae-won and Chairman Chey Tae-won, who are being investigated to determine whether they embezzled 99.2 billion won ($86 million) from company coffers.

The group said it plans to pour 19 trillion won into facilities and research and development efforts this year, with the sum more than doubling last year’s total investment of 9 trillion won. “When the economy is in trouble at home and abroad, businesses need to expand investment and employment, and take aggressive action to shore up the national economy,” Chey said in a presidential meeting on Tuesday. He also urged each subsidiary to come up with aggressive management plans of their own.

The group will allocate 2.1 trillion won to resource development to help resource-deficient Korea transform into an oil producer this year and hire 7,000 new employees, it said.

Prosecutors said yesterday that they had formally charged the SK chairman with embezzlement.