Homeplus may put MVNO in cart

Homeplus may put MVNO in cart 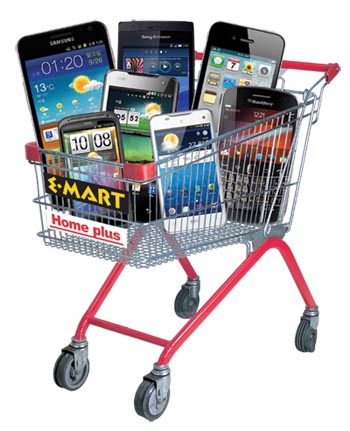 Homeplus, Korea’s second-largest discount store chain, rattled the domestic telecoms market yesterday by announcing it is considering starting a Mobile Virtual Network Operator (MVNO) business in the first half of this year.

Homeplus said it is negotiating with SK Telecom, KT and LG U+ on leasing prices. It is not believed to have selected a partner yet because all three mobile operators have proposed different terms and conditions.

Major mobile operators in Korea currently run its MVNO business. SKT has rented frequencies to five businesses with a total of 50,000 subscribers, while KT has done so to 10 companies with an aggregate 310,000 subscribers. Those renting the frequencies can provide customers with cheaper payment plans centered on basic calling services as they do not need to pay for the system’s upkeep.

“We are in the middle of reviewing the plan, so details have not yet been discussed,” said an official at Homeplus. An executive from U.K.-based Tesco, the parent company, visited Seoul in December to learn about Korea’s telecoms industry, he said, denying rumors that the representative met with prospective MVNO partners.

Although the official said Homeplus is not certain the service can be launched in April, the company is reportedly discussing with various partners the feasibility of rolling it out in the first half of the year.

Speculation has been mounting that the retailer will expand into the telecoms business, much as Tesco has done in the U.K. But Homeplus has flatly denied the rumors until recently.

Last year, Tesco announced that it had secured about 100,000 mobile service customers. After expanding its service overseas, it now claims its customers can call any of 27 countries for just for 1 cent per minute. 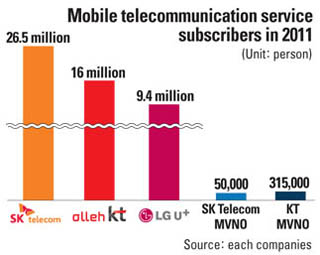 Homeplus is not the first retailer to mull entering the MVNO business.

In November, Mobile E-Mart, a mobile phone dealership that operates in E-Mart stores, started selling 1,000 mobile phones that run on a frequency rented from KT. The mobile service operator Free Telecom provided the phones with a low-priced calling plan and a basic rate of 4,500 won ($3.91). About 750 phones were sold during the month.

This served as a trial for E-Mart to see how it would fare in the business, according to an official at Shinsegae I&C. However, the official said E-Mart has no plan to continue with the project just yet. CJ Hellovision, a cable TV unit of retail giant CJ Group, started selling MVNO smartphones with a base fee as low as 17,000 won from the first day of the new year. According to the company, an estimated 14,000 customers made reservations on that day. The figure is double the average daily reservation numbers. Market observers attribute the solid performance to CJ Group’s strong brand recognition.

Retailers are showing interest in joining the mobile telecom market at the same time as the regulations governing mobile phone services are undergoing change.

Especially, as the government’s plan to approve the establishment of a fourth mobile service provider was scrapped at the end of last year, MVNO has arisen as a viable alternative.

Additionally, the government said last year that it will launch a new system allowing consumers to receive telecom services upon purchasing any device. Under the old system, they needed the handset’s serial number to be verified by a service provider first.

As it mulls stepping into the world of MNVO, Homeplus has a huge advantage by dint of owning 125 large discount stores and 249 supermarkets, all of which can be used as distribution channels for mobile phones

“Combining the telecom and retail industries could create positive synergy effects,” said a researcher at Shinhan Investment. “This may also trigger price competition in the telecom industry that could lower phone bills.”