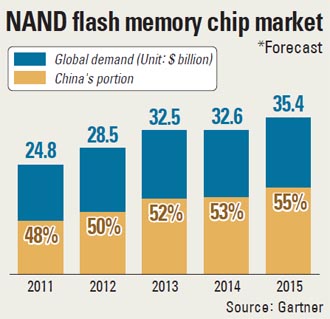 Samsung Electronics has been given the green light to build a new plant in China for NAND flash memory chips, with the location yet to be decided, the Ministry of Knowledge Economy said in a press release.

The world’s No. 1 manufacturer of computer memory chips got the nod from the Korean government yesterday after filing its request on Dec. 6, the ministry said.

The company’s desire to build a second overseas semiconductor production facility to bolster its plant in Austin, Texas, flags its belief in the burgeoning China market and its appetite for smart gadgets. NAND chips are mostly used in mobile devices.

Under Korea’s Industry Technology Protection Law, local companies must seek approval before setting up facilities overseas for products that contain one of about 50 core Korean technologies, due in part to fear of leakages of trade secrets. 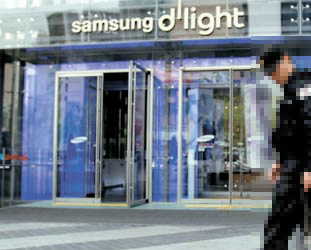 The government requires approval for NAND chips classed as 50 nanometers or smaller. Samsung aims to produce 10-nanometer chips. The number refers to the miniaturization process, with a smaller number indicating greater sophistication.

Other protected technologies include drill vessels and hybrid engine parts.

According to the ministry, Samsung cited two factors in its request: higher demand for NAND flash memory chips due to the popularity of smart devices and greater need to be physically closer to the China market due to its exponential growth.

The chips in question are used to store data for devices such as digital cameras, portable music players and mobile communications devices. As market experts predict China will become the world’s biggest market for smartphones, tablets and flat-screen TVs in a few years, major players are rushing in to try and secure brand loyalty.

Having a chip operation in China would help Samsung better supply goods to Chinese customers as well as compete with Chinese chipmakers, who have been fast increasing their presence in the global arena.

The China plant will roll out Samsung’s most advanced NAND flash memory chips. If Beijing gives its approval, construction is expected to begin within six months, with mass production slated for the second half of 2013.

The plant will be able to produce 100,000 12-inch-diameter wafers per month, putting it on par with Samsung’s 16 chip plants in Korea.

“We will negotiate with the Chinese government and choose the site for the plant at a later date,” a Samsung official said. According to industry sources, it usually requires 3 trillion won to 5 trillion won ($2.6 billion to $4.4 billion) to build a cutting-edge semiconductor production facility.

According to Korean media reports, Samsung and Beijing have different ideas about the location.

Samsung is reportedly eyeing the capital given its strong logistics, transportation and infrastructure. Also, multinational IT corporations like IBM, Microsoft and HP, as well as a string of Korean IT firms, have set up bases there.

But the Chinese government is hoping that Samsung chooses western or central regions as part of its “Go West” campaign to invigorate regional economies.

Meanwhile, Seoul has shown itself preoccupied with possible technology leaks, which could result in enormous losses for a company like Samsung.

When the possibility popped up several years ago that Hynix, the world’s second-largest memory chipmaker, may be sold to a Chinese company, there was strong opposition from the local industry and public. Critics argued that the move could lead to the sale of Hynix’s proprietary technologies to foreign competitors.

Samsung said it will minimize the possibility of technology leaks by only transferring its technology to its new China branch office.