Kim ready to soar in Year of the Dragon

Kim ready to soar in Year of the Dragon 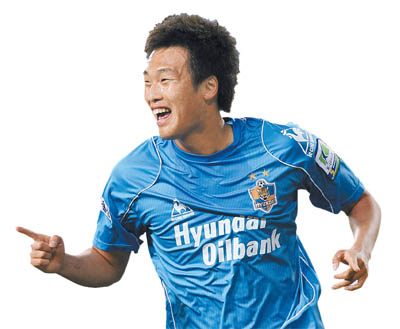 The Year of the Dragon has arrived, and Ulsan Hyundai FC striker Kim Shin-wook, born in the dragon year of 1988, is hoping to step up as the league’s most lethal attacker.

The 196-centimeter (6-foot, 5-inch) striker had an impressive 2011 season. While leading his club to the Korea Professional Football League Championship, Kim also played in the Asian Cup, building up his experience at the international level.

The highlight of Kim’s season was in the playoffs, during which Ulsan became the first six-seed to reach the final stage in K-League history. Although his club lost to Jeonbuk Hyundai Motors FC in the two-legged championship, Kim created buzz from the beginning.

The striker found himself centerstage during the second round of the playoffs. During a penalty shootout, Kim chipped over Suwon Samsung Bluewings FC’s Korea international goalkeeper Jung Sung-ryong and celebrated provocatively in front of Suwon fans, earning him a “bad boy” image.

Statistics show that Kim has gradually risen as the Korean league’s premier striker. He scored seven goals in his 2009 debut season and 10 goals in 2010. But last season, he netted 19 goals, the league’s second-best scoring total.

The scoring machine wasn’t originally a striker when he signed with Ulsan. In high school, the 24-year-old was playing defensive midfielder and in his college years, he played center back.

However, Ulsan coach Kim Hokon changed his position to striker in 2009 during the Asian Football Confederation Champions League match against Beijing Guoan FC, where he has remained since.

In an interview this week with Ilgan Sports, the JoongAng Ilbo’s sports newspaper, Kim said he wants to set up a new style attack taking advantage of his height. In the Year of the Dragon, the Ulsan striker looks to cement his name as one of the best strikers in the nation.


Q. You were born in the Year of the Dragon back in 1988. Do you have any special goals this year?

A. The Year of the Dragon doesn’t actually induce any special thoughts, but I do want to perform better. Last year, I was the top scorer in the League Cup with 11 goals, but in the league itself, I didn’t play well. My goal is to score 20 goals in the league.

Does that mean you are looking for a scoring title?

I’m not thinking about a title. I’ve never been good when those thoughts were in my head.

What are your goals for the national team?

The national team is the equation that I still need to solve. Probably the worst moment was when we lost to Japan 3-0. I really have regrets about my performance. If I get a call from the national team again, I want to score a goal and finish my work. If I can take advantage of my forte, I think I will have chance again.

What is your forte?

First, I’m good in the air using my height advantage. My first priority is to show a top performance as the front striker and then I also want to be good with plays using my foot skills.

With 100 points being perfect, I would give 80 points to both. My goal next will be to raise those points to 90 each. I will show that I’m gradually improving rather than reaching 100 right away.

Among those footballers born in 1988, who do you view as the biggest rival?

You might have noticed that there are not many players who are born in 1988. I’m good friends with Koo Ja-cheol and Ki Sung-yueng, but they are born in 1989 [laughs].

In the K-League, I get along with Lee Seung-ki [last year’s Rookie of the Year] well. I’ve known him from my middle school years. He has good characteristics, and as a footballer, he is a wellrounded player.

Are you planning to have any special goal celebrations this year like you did in the playoffs against Suwon?

Actually, it’s not going to be that special, although I can assure you that I will perform my goal celebrations aggressively. I want fans to watch me closely.

What is your personal goal outside football this year?

I haven’t sent my parents on an overseas trip yet. I’m getting along well with my parents, but when I try to do something good for them, they look at me awkwardly. [Laughs.] But this time, I will treat them with an overseas trip.