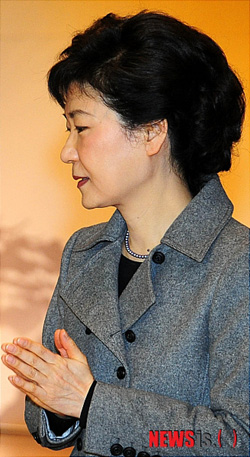 Panic is spreading among older lawmakers of the Grand National Party as its emergency council sends signals that they are dinosaurs who may not be allowed to run in the April general election.

Park Geun-hye, the interim head of the party, declared Tuesday in a speech that the GNP will not give any preference to incumbent lawmakers during the nomination process for the April legislative elections, adding that she is not an exception.

Lee Sang-don, a professor and a member of the GNP’s emergency leadership who is working on new nomination guidelines for the party, went a step further by saying that a generational change is needed for Daegu and North Gyeongsang.

“We want to see a wind of change in Park’s political hometown of Daegu and North Gyeongsang,” he said in a radio interview on Tuesday. “For the party to succeed in the elections, we need a large number of new recruits, and the starting point must be those areas.”

Daegu and Gyeongsang are traditional GNP strongholds, and many sitting lawmakers are Park loyalists.

Criticizing the incumbent lawmakers for “winning easy victories,” Lee said the political future of Park, a presidential front-runner, could depend on their decisions to drop out of the elections to give way to new blood.

Older GNP veterans are clearly being targeted in the emergency leadership’s reform efforts for the party.

Of the party’s representatives now in the National Assembly, 20 were born between 1935 and 1945. Seven of those senior lawmakers represent Daegu and North Gyeongsang, while five represent Busan and South Gyeongsang. As of now, only two - Representative Lee Hae-bong, a four-term lawmaker from Daegu and a key Park loyalist, and President Lee Myung-bak’s elder brother Lee Sang-deuk - have said they won’t seek re-election in April.

Representative Joo Seong-young of Daegu said yesterday that he feels bitter about the situation, but he admits to the necessities. “We should humbly accept it and follow the decision of Park’s emergency leadership,” he said.

Representative Chung Doo-un also revealed Tuesday the party’s plan for who should be denied nominations. The plan, created by the GNP think tank Yeouido Institute in November, showed that lawmakers whose approval rating is five percentage points lower than the party’s approval rating in their districts won’t be given nominations. Politicians standing trial for crimes are also to be excluded.

“To reform the entire party, changes must start from nearby,” Representative Sohn Beom-kyu, a first-term lawmaker representing Goyang and Deokyang of Gyeonggi and a Park loyalist, said yesterday in a TV appearance. “The Park loyalists must set an example with their self-sacrifices to allow a drastic overhaul.”

He said it was particularly undesirable for the party to try to protect highly unpopular incumbent lawmakers, forecasting that many Park loyalists will likely give up their careers.

Sources close to Park said she may declare that she won’t seek re-election in Daegu. In an interview with the JoongAng Ilbo on Dec. 1, Park said she would run.

“If Park decides not to run, it will raise significant pressure on senior lawmakers representing Gyeongsang to follow suit,” a Park aide said.

Others argued that it is necessary for lawmakers in GNP strongholds in southern Seoul - the so called Gangnam belt - to give way to new faces. Earlier last week, the emergency council members also demanded the former leadership of the GNP and political heavyweights who share ties with President Lee Myung-bak to stand down.

The lawmakers targeted by the reform measures, particularly the Lee loyalists, are trying to fight back. Representative Chang Je-won told MBC Radio yesterday that emergency leadership members Kim Chong-in and Lee Sang-don, who promoted nomination reforms, must resign for having created internal strife, and threatened a group action if they refuse to do so. He said there are many lawmakers from both the pro-Lee and pro-Park factions who resent the two emergency leadership members’ actions.

Another pro-Lee representative, Won Hee-mok, said naming people who should retire is an act of political violence.

Reformists of the GNP criticized the Lee loyalists’ resistance. “It is cowardly for them to criticize Kim Chong-in and Lee Sang-don for proposing nomination reform,” Representative Gu Sang-chan, a reformist and Park loyalist, said.