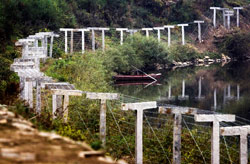 The new North Korean regime led by Kim Jong-un is getting tougher on people trying to defect, according to sources familiar with the country yesterday.

“Kim Jong-un has ordered intensified control in border areas in recent years since he emerged as successor to his father Kim Jong-il,” a defector-turned-reporter at Open Radio for North Korea, a Seoul-based media organization specializing in the North, told the Korea JoongAng Daily. “And now Kim Jong-un is ordering immediate executions when people are caught trying to cross the borders [without permission].”

The Japanese daily Sankei Shimbun reported yesterday that Kim issued an order not to let a single defector get away around Dec. 19, when the North announced the death of Kim Jong-il, citing a source supposedly knowledgeable about the North Korea-China border areas.

The paper said Kim gave the order to a special security squad of the Korean People’s Army under his direct control, and assured them that they were authorized to shoot defectors on the spot.

The U.S.-based Radio Free Asia reported Tuesday that three North Korean defectors were shot dead while crossing the Amnok River (called the Yalu River in China) into China from Hyesan in the North’s Ryanggang Province by North Korean security guards on Dec. 31.

Defections from the North sharply increased in recent years as the country suffered serious food shortages and its people were more exposed to information from the outside world. The cumulative number of North Koreans defecting to the South rose from around 1,400 in 2000 to around 22,000 as of the end of last year.

The reporter at Open Radio for North Korea said the new regime is publicly discussing defection, a once taboo subject, to scare people from trying to flee.

“The government in the North previously tried to minimize the public’s exposure to news of defections, concerned it could encourage more,” the reporter said. “But as the defections showed no signs of stopping, it is now announcing defection cases, telling who defected and describing what kind of punishment they will receive once they get caught.”

An official of another Seoul-based media outlet, Free North Korea Radio, told the Korea JoongAng Daily that the Kim Jong-un regime is now ordering the killing of relatives across three generations of families of some people caught trying to defect.

“There was nothing like the eradication of three-generations in the Kim Jong-il era, but now it’s happening under Kim Jong-un,” the official said.