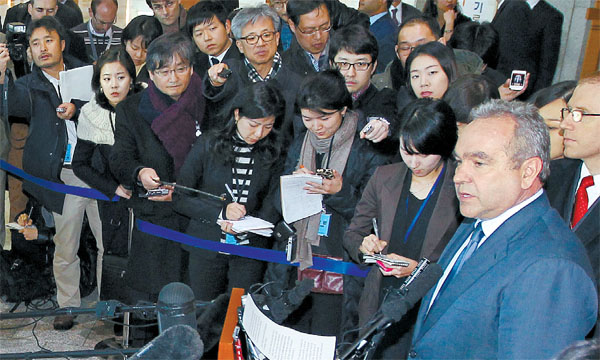 Kurt Campbell, right, the U.S. assistant secretary of state for East Asian and Pacific Affairs, speaks to the media after meeting with Minister of Foreign Affairs and Trade Kim Sung-hwan at the Foreign Ministry in Seoul yesterday. Campbell arrived Wednesday to meet with South Korean officials to discuss North Korea following the death of North Korean leader Kim Jong-il. [YONHAP]


The Ministry of Foreign Affairs and Trade and the Ministry of Unification said yesterday they have set the stability of the Korean Peninsula as their foremost priority for this year, following heightened geopolitical uncertainties touched off by the death of North Korean leader Kim Jong-il.

“In preparation for increased fluidity in the political situation of the Korean Peninsula, we will make efforts to maintain the peace and stability of the Korean Peninsula and to secure substantial progress in the North’s denuclearization,” the Foreign Ministry said in a summary of its 2012 policies for President Lee Myung-bak.

The ministry said it will enhance coordination with surrounding countries such as the U.S., China, Japan and Russia for stable management of the Korean Peninsula and try to lead changes in the North’s attitude toward the South.

The Seoul-Washington alliance, which it said is at its best-ever state, will be maintained or advanced further to secure public trust in national security, the ministry said.

It was the first visit to the South by a senior U.S. official since the death of North Korean leader Kim Jong-il on Dec. 17.

“In all of our meetings, I underscored the strongest possible commitment of the United States to the enduring partnership between the United States and the Republic of Korea and the determination to be as tightly aligned as we together face the new leadership transition in North Korea,” Campbell told reporters after the meetings.

In the meeting with reporters, Campbell reiterated Washington’s stance that improvement in inter-Korean relations is “essential” to take denuclearization negotiations with the North forward. In year-end messages, the North warned that the new regime, now led by Kim Jong-un, youngest son of Kim Jong-il, won’t make any changes in its policies and won’t engage the South.

The Ministry of Unification, in its New Year policy brief, said launching a high-level inter-Korean negotiation will be one of its focuses.

“We leave the door open for dialogue with North Korea,” Yu Woo-ik, Minister of Unification, told reporters at a briefing yesterday. “If we build a responsible high-ranking dialogue channel between the South and the North and manage it stably, we can discuss every issue with no limit on the agenda.”

The minister, however, said that the government’s demand for an apology for the North’s two deadly attacks in 2010 remains a precondition for reconvening stalled dialogue. “We haven’t changed our position demanding the apology. However, we can discuss together how they will apologize at a negotiation table,” he said.

Foreign Minister Kim Sung-hwan said Seoul could extend an invitation to Kim Jong-un to attend the Seoul Nuclear Security Summit slated for March, as it did to his father last year.