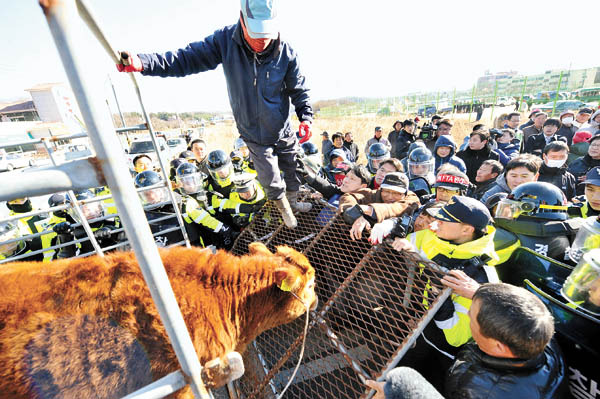 Defying policemen’s attempt to block them, farmers try to unload a cow from a truck to participate in a livestock farmers’ rally in Ulju County, Ulsan, yesterday to protest plunging cattle prices. After the rally, the farmers tried to drive to the Blue House in Seoul. But they were blocked by the police at the entrances of highways. [YONHAP]


With the prices of domestic cattle plummeting, livestock farmers tried to stampede Seoul yesterday to deposit their animals at the Blue House, laying the blame for their financial plight on President Lee Myung-bak and the free trade agreement he signed with the United States last year.

Most of the angry farmers and all of their animals were blocked from entering the capital.

“Livestock farmers from all over the country will hand in their cattle to the Blue House today,” Chung Ho-young, the chairman of the South Gyeongsang center of the Hanwoo (Korean beef) Association, told Korean media during a press conference near a ramp of the Namhae Expressway in Haman, South Gyeongsang, yesterday.

About 300 livestock farmers had their cattle loaded on trucks ready to roll into Seoul. 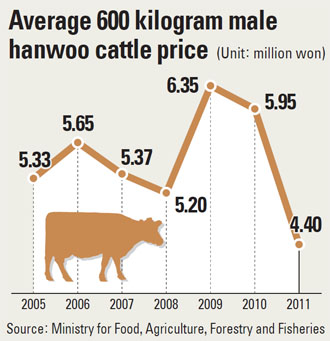 “The government should know how hard breeding cattle is,” Chung thundered. He was surrounded by banners and placards on the trucks criticizing the government: “Breed cattle like us, and you will find what hopeless work it is in this country!” and “Free trade agreement for whom? We want swift solutions for this terrible price slump!”

According to the National Police Agency, about 900 livestock farmers attempted to come to Seoul from all over the country including, Busan, Ulsan, Gwangju, Daejeon and northern Gyeonggi with about 1,000 cattle. The rolling rally, the police said, was organized by the members of the Hanwoo Association and individual livestock farmers to protest over the government’s failure to stabilize the live cattle price and the Korea-U.S. free trade agreement, which the farmers consider a key reason for the price slump. The farmers wanted to surrender their animals to the Blue House as a symbol of giving up the business.

About 150 chapters of the Hanwoo Association announced Wednesday on the organization’s Web site that they would stage a large rally in Seoul, particularly nearby the Blue House as well the National Assembly in Yeouido, western Seoul.

“The Korea-U.S. free trade agreement ratification has boosted the farmers’ anxiety to its peak level,” Cho Byung-im, an official at the livestock management division of the Ministry for Food, Agriculture, Forestry and Fisheries, told the Korea JoongAng Daily.

The right number of cattle for the market at this time, the ministry said, would be around 2.6 million.

Cho said the jump in the number of cattle was a result of a surge in demand for local beef after 2008, when consumers were frightened by rumors of mad cow disease in U.S. beef. That demand deflated after fears subsided and cheap U.S. beef was imported, leading to an oversupply of local livestock.

The rally in Seoul was defused yesterday after police blocked 10 main expressways leading to Seoul, including the Gonjiam, Anseong and Cheonan interchanges.

At the Haman Interchange, 500 police from Haman County and neighboring regions checked all vehicles and turned away any carrying cattle. Dozens of aggressive farmers tried to get through but were repulsed by the police.

Dozens of Hanwoo Association members who failed to bring their cattle to Seoul gathered later in the afternoon at a local community center close to the Blue House in Jongno District, central Seoul, and held a press conference.

“We will continue to rally until the government provides ultimate solutions,” said Nam Ho-kyung, chairman of the Hanwoo Association. “The FTA with the U.S. will exempt the 40 percent tariff on U.S. beef in the next 15 years, which means the price for hanwoo meat will drop more.”

As a temporary expedient to help the farmers, the Agriculture Ministry announced Wednesday it will replace imported beef supplied to the Korean military with hanwoo.