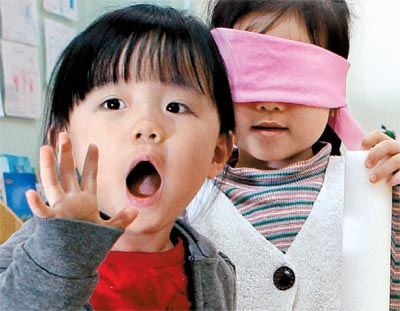 Children at a Sookmyung Women’s University preschool learn Tuesday to “say stop” to bullying in the “Stop School Violence” campaign, which encourages students to stand up to bullies. By Oh Jong-taek

Last month’s suicide of a bullied 13-year-old middle schooler in Daegu has started a ripple effect throughout the country, triggering government agencies, the police and private organizations to frantically come up with measures to crack down on violence among students.

The Seoul Metropolitan Police Agency and the Seoul Metropolitan Office of Education signed an agreement yesterday to start a squad of “school police” counselors in Seoul, sending one to each elementary, middle and high school in the city. In addition, one veteran police officer will be dispatched to all middle and high schools in Seoul to watch for violent goings-on and investigate bullying.

The JoongAng Ilbo’s “Stop School Violence” campaign, which is encouraging schools, parents, the government and also the private sector to join forces to eradicate school violence, is also gaining momentum with numerous groups joining in.

The Korea Taekwondo Association, which has 12,000 members, told the JoongAng Ilbo it wants to participate in the campaign by “donating taekwondo education” to students.


The Daejeon Metropolitan Office of Education also signed up for the campaign and said it will adopt the “yellow and red card system” to warn bullies while also providing them with appropriate help. Kim Shin-ho, education superintendent of Daejeon, said, “We’ll take note of school principals who handle school violence tepidly and give penalties.”

Students are also jumping onto the nationwide movement to end school violence. Park Han-ul, an 18-year-old high school student who has been a victim of bullying, made an online video about school violence and suicide prevention, saying it was a public service. In Park’s video, which is called “Criminal School,” he tells students to “understand that violence within school is not a minor issue but a crime.”

The clip was uploaded on Sunday and has garnered over 5,000 views as of yesterday, being shared via Facebook and Twitter.

Park said he wants to join the nationwide campaign “Stop School Violence” and make another video to encourage students to stand up to bullies by shouting, “Stop!”

Students are also expanding the conversation by saying that bullying is not only happening inside schools but also online, and they want adults’ attention to help curb it.

The Munhwa Ilbo reported yesterday that social networking services are being used to bully students. According to the report, mobile messaging applications such as Kakao Talk are being used as a “people’s court,” in which a group of students join a group chat and “judge” if a certain student should be outcast for wearing weird clothes or for boasting. Then the group decides on how to punish the student.