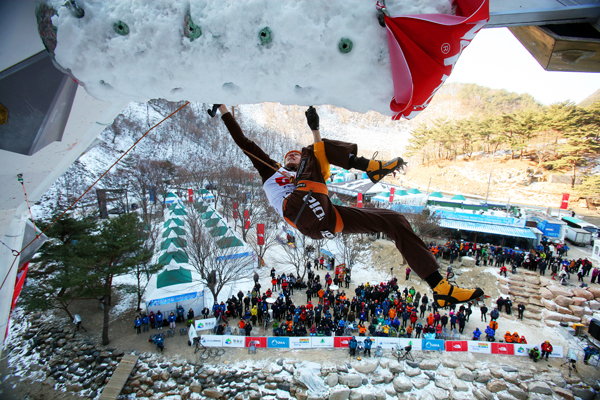 A participant climbs an ice wall during the 2011 Ice Climbing World Cup in Cheongsong, North Gyeongsang. This year’s event will be held Jan. 14-15. [JoongAng Ilbo]

For those who want to watch professional ice climbers, the 2012 Ice Climbing World Cup is coming back to Korea next weekend at the Eoruemgol (Ice Valley) in Cheongsong County, North Gyeongsang.

The competition is one of five events in the World Cup series hosted by the International Mountaineering and Climbing Federation and the only World Cup event held in Asia.

This year, the Eoruemgol will also be co-hosting the Asian Championships, although there will not be a separate competition - climbers from the Union of Asian Alpine Associations will be awarded later based on their results in the World Cup.

The event has been growing fast among mountaineers. Organizers say some 130 climbers from 25 countries will compete this year, up 20 percent from 2011. All top-20 ranked climbers will participate in this event.

Korea is expected to send 37 climbers, including world No. 1 Park Hee-yong in the men’s lead competition, and world No. 3 Shin Woon-sheon, the first Korean women to win the World Cup series. Both are looking for the top honors this year after finishing runners-up behind Markus Bendler of Austria and Maria Olokonina of Russia, respectively, in the inaugural event.

For the pre-event of the World Cup, the 2012 Nepa Cup National Ice Climbing Championship will be held this weekend at the same venue. Hosted by the Korean Alpine Federation, the competition will feature a total of 230 Korean ice climbers. The tournament also serves as the national team selection stage for the next World Cup.

“Cheongsong is a place where outdoor festivals are held every season,” Cheongsong County Governor Han Dong-soo said. “We want to promote ice climbing all over the nation and will raise this place as one of the best places in the world to enjoy ice climbing.”