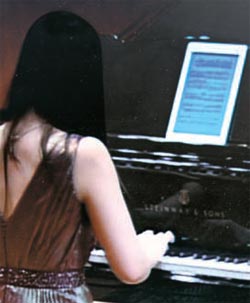 Pianist Son Yeol-eum performed at Kumho Art Hall on Dec. 22 with an electronic partner that has steadily been gaining notoriety in classical music circles.

After Son performed Mendelssohn’s “Wedding March” and “Dance of the Elves,” she went out on stage again with an Apple iPad in one hand.

She put the iPad on a music stand and started her last piece of the evening, Beethoven’s Symphony No. 9 arranged by Franz Liszt.

As she played, she only had to touch the iPad with her left index finger to turn the pages of the score.

Most pianists memorize the music for their performances, but when playing a piano concerto with an orchestra, they are generally assisted by a page turner.

But Son performed with neither a page turner nor a conventional paper score.

When she had finished playing, applause filled the house as she bowed, her iPad still in hand.

It was Son’s first performance with an iPad in a formal concert hall.

Afterward, Son talked about her decision to make the transition from paper music scores to digital ones.

“Paper music scores are heavy to carry around, and that’s why I bring my iPad with me when I practice,” Son said after her performance. “Carrying a lot of music around is difficult.”

Son not only keeps her music scores on her iPad, she also has an app called Fourscores that acts as a metronome to keep time.

Last November, The New York Times ran an article about New York Philharmonic conductor Jeffrey Kahane and how he is using the iPad during performances to revolutionize classical music conducting.

It talks about how, in a performance with the orchestra that month, Kahane had used an iPad instead of a conventional score to conduct a Mozart piece.

Articles from the previous year documented Chinese pianist Lang Lang’s use of an iPad piano app to play “Flight of the Bumblebee” at a performance in 2010.