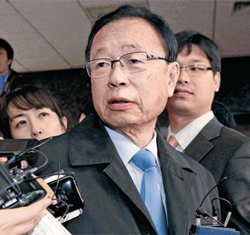 The aftermath of a Grand National Party lawmaker’s bombshell revelation that a former party chairman had attempted to buy his vote before the leadership election touched a top Blue House official and the incumbent National Assembly speaker yesterday.

Representative Koh Seung-duk claimed earlier this week that there had been an attempt to bribe him before a chairmanship election, without specifying which election, and the GNP leadership asked the prosecution to investigate the case. Yesterday, the Seoul Central District Prosecutors’ Office asked Koh to appear before the prosecution by 2 p.m. tomorrow to answer questions as a witness.

Koh has said he will fully cooperate with the probe.

Though the first-term lawmaker has refused to disclose the name of the candidate who attempted to buy his vote, local media reported yesterday that National Assembly Speaker Park Hee-tae had tried to buy his vote during the 2008 chairmanship election.

“I heard directly from Koh that it was Park who tried to buy his vote and that Kim Hyo-jae, the Blue House senior secretary for political affairs, delivered the envelope with the money,” the Hankyoreh reported yesterday, quoting a GNP lawmaker. Both Park and Kim have denied the reports.

“The accusation is completely untrue,” Kim said yesterday, stressing that he had almost no contact with Koh.

“I am picky about who I meet,” Kim said. “I believe in contributing to the success of the organization to which I belong rather than working for my individual success. I am careful about choosing where I belong, and I think it is my job to devote myself to it. And I don’t mix with people who take a different attitude.”

Kim also said he would take legal action if the media continued to name him as a suspect.

“That never happened,” Park said. “It has nothing to do with me, and I have no knowledge about [the attempt to buy votes].”

He told reporters yesterday morning that he did not know Koh very well at the time of the chairmanship election.

Park won the GNP chairmanship in July 2008, largely with the support of Lee Myung-bak loyalists. Park was Lee’s campaign manager for the 2007 presidential primary.


Although he failed to win a nomination to run in the 2008 legislative elections, Park became the chairman of the ruling party and served in the post from July 2008 to September 2009.

Kim, a veteran journalist who worked for the Chosun Ilbo beginning in 1979, began his political career in 2008, when he became a first-term lawmaker. He joined the Blue House staff last June as the senior secretary of political affairs.

In Park’s race to become ruling party chairman, Kim served as his head campaign manager. When Park won the race, Kim served as his chief of staff. After the election, Park reported to the National Election Commission that he had spent nearly 108.7 million won ($93,500) on his chairmanship campaign.

Park resigned from the chairmanship after winning a legislative by-election in October 2009 to begin his fifth term as a lawmaker. He was elected as the National Assembly speaker in June 2010 and gave up his GNP affiliation because the National Assembly Act bars an incumbent speaker from having a party membership.

The prosecution’s investigation into Koh’s accusation is expected to proceed quickly, as the GNP leadership and the lawmaker have promised to cooperate fully.

It took only one day for the GNP’s emergency leadership, created last month to salvage the sinking ruling party, to ask prosecutors to look into the case after Koh revealed Wednesday that he had received an envelope containing 3 million won from a candidate in a party chairmanship race.

Former GNP lawmaker Kim Jae-won, the party’s head legal counsel, was scheduled to appear at the prosecution yesterday evening to discuss the case.

Koh is scheduled to submit to questioning tomorrow.