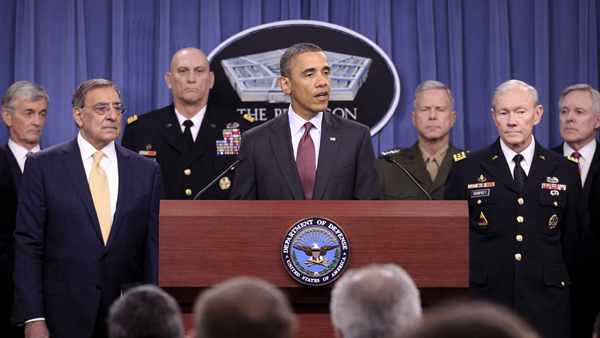 U.S. President Barack Obama, center, speaks about the Defense Strategic Review at the Pentagon in Washington on Thursday. Obama unveiled a defense strategy that calls for greater U.S. military presence in Asia and envisions cutting troops in Europe as the Pentagon seeks to reduce spending after a decade of war. [REUTERS/YONHAP]


After the Obama administration unveiled its reshaped national defense strategy at the Pentagon on Thursday, concerns are rising in South Korea as to what security implications the planned budget cuts will have on the Korean Peninsula.

U.S. President Barack Obama made a rare appearance at the headquarters of the Department of Defense to announce plans for a “leaner” and more agile military after a decade of war.

“Our military will be leaner, but the world must know the United States is going to maintain our military superiority,’’ Obama said.

“We’ll continue to get rid of outdated cold war-era systems so that we can invest in the capabilities we need for the future, including intelligence, surveillance and reconnaissance; counterterrorism; countering weapons of mass destruction; and the ability to operate in environments where adversaries try to deny us access.” 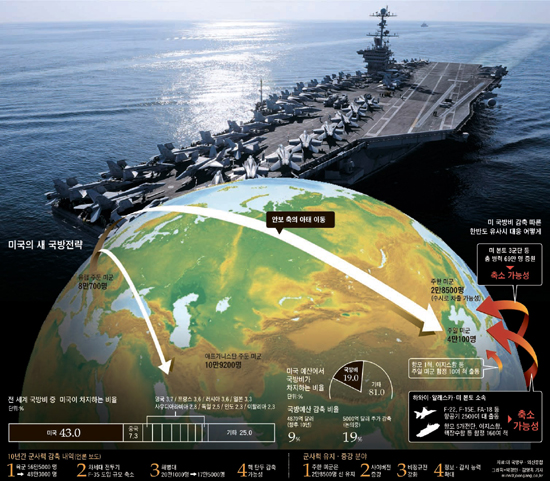 Obama affirmed that the United States would expand its role in the Asia-Pacific region, a shift many experts attribute to China’s growing military presence.

“We’ll be strengthening our presence in the Asia-Pacific, and budget reductions will not come at the expense of that critical region,” Obama said.

The Pentagon now faces at least $487 billion in cuts over the next decade, a downsizing prompted by the country’s dire fiscal position. Although specifics on budget cuts were not released, Secretary of Defense Leon E. Panetta did say the military will trim the size of the Army from 570,000 soldiers to around 490,000.

Speculation is rising in South Korea that a smaller Pentagon budget will curtail the 28,500 U.S. forces in the country, which have been stationed in the South since the armistice agreement was signed after the 1950-53 Korean War.

“Peter Lavoy, acting assistant secretary of defense for Asian and Pacific security affairs, and James D. Thurman, commander of the U.S. forces in South Korea, explained the budget plan to us on Wednesday and Thursday before the official announcement,” Lim Kwan-bin, deputy defense minister for policy, told reporters at a briefing yesterday.

“They explicitly confirmed that the U.S. forces in Korea won’t be affected and the defense agreement made between the two countries won’t be changed as well.

A senior Blue House official said yesterday that Seoul and Washington had sufficiently discussed the new U.S. defense strategy beforehand, adding that the impact in the Asia-Pacific region will be minimal.

“It is nothing new, and the changes were expected,” he said. “The U.S. government had talked about the direction from time to time in the past. Because it is just an adjustment of U.S. posture in the Asia-Pacific region, not a change in military strategy, it won’t impact our security greatly.”

The Blue House official added that it will be up to China as to whether the issue will be addressed at next week’s summit. President Lee Myung-bak will meet with President Hu Jintao in Beijing on Monday.

“From Korea’s perspective, it’s not something that we will raise and talk about with China,” he said.

Lee Seok-su, a professor at the state-run Korea National Defense University, told the JoongAng Ilbo that while the United States won’t reduce the current size of its forces on the peninsula, it could ask for more money from the South in order to maintain them. Seoul has budgeted about 750 billion won ($645 million) for sustaining American troops in this fiscal year’s defense budget.

“Although [the U.S.] plans to cut military spending in other sectors, it won’t be easy to cut the current spending on defense in South Korea,” Lee said. “But the U.S. could possibly ask for an increase in Korea’s spending for the U.S. forces, considering the fact that the U.S. did the same to Japan.”

Baek Seung-joo, chief of the state-run Center for Security and Strategy at the Korea Institute for Defense Analysis, said the South should shift its defense strategy from a heavy reliance on U.S. forces to holding wartime operation control.

In 1953, when the Korean War ended, both countries agreed to “Operation Plan 5027,” under which 690,000 U.S. troops were deployed to the South to defend against a North Korean military invasion.

“If a full-scale war breaks out, we will have our own military, the U.S. forces of Korea and the U.S. troops deployed by the operation plan,” Baek said.

“But due to this revised defense strategy, it becomes difficult to expect a concrete size of U.S. reinforcements.

“Ahead of 2015, when South Korea will retake wartime operation control, we should prepare for building up our independent military abilities and reducing the heavy reliance on the U.S. military,” he added.