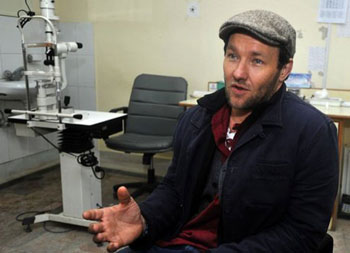 KATHMANDU, Nepal - Hollywood actor Joel Edgerton confirmed on Saturday he is in talks to lead a stellar cast in a film by Oscar-winning director Kathryn Bigelow about the killing of Osama bin Laden.

The 37-year-old Australian, who starred alongside Tom Hardy in martial arts blockbuster “Warrior,” said in an interview with AFP he has been in contact with Bigelow’s team over a possible lead role although a deal is yet to be struck.

“I’ve been involved with those guys for a long time. The thing was I was possibly going to be involved when the film was of a different incarnation, before Bin Laden was killed,” he told AFP. “I still have a relationship with those guys ... there’s nothing definite to report. In fact, I just got a ton of e-mails about it but all I’ll say is it’s not necessarily untrue but it’s not necessarily true.”

Bigelow, who won an Academy Award for best director for “The Hurt Locker” in 2010, is firming up the cast for the controversial film, with Idris Elba, Guy Pearce and Hardy all also reportedly pencilled in for roles.

Republican politicians in the United States voiced concerns that Barack Obama’s administration leaked classified details about May’s Navy SEALs mission to the team behind the still-untitled film, slated for release in December.

The White House has denied the allegations.

Bigelow had reportedly been planning a film about the hunt for Bin Laden long before the raid on the terror kingpin’s compound in northern Pakistan in May last year.

Edgerton has not revealed which part he is being lined up for in the hotly anticipated film, but a Navy SEAL role would see him cement the tough guy image he crafted during the making of “Warrior.”

Speaking during a tour of eye hospitals in Nepal, the actor said he underwent a gruelling training schedule and sustained several injuries during the filming of “Warrior,” which tells the story of two estranged brothers entering a mixed martial arts tournament.

“We got hurt - we got punched in the face a bit. A lot of the kicks to the head and the body are pulled, but they are not completely faked,” he told AFP.

“I got punched in the face by Kurt Angle, who is the guy that plays the Russian. My natural reaction was going to be to complain about it or whinge and then I thought, all of these guys I’m working with, it was their job to punch and be punched and so you don’t want to complain.”