Are we ready for a euro zone split?

Are we ready for a euro zone split?

On Jan. 3, Greece’s government spokesperson Pantelis Kapsis issued a verbal shot heard around the world that was strong even for this debtor country prone to ultimatums.

“The ($165 billion) bailout agreement needs to be signed, otherwise we will be out of the markets, out of the euro,” he said in an interview with a local TV station.

It was the first time Greece publicly raised the idea of leaving the euro zone, which in turn could spark the widespread breakup of the euro.

Although the breakup of the 17-nation euro zone had been unthinkable, the contingency - and the need to prepare for its remote but frightening aftermath - is gaining in popularity not just among doomsayers but government officials and global financial companies.

Since late last year, regulators in the U.K. exhorted its financial companies to prepare for the shock that a possible euro breakup would bring, while global investment banks have reportedly looked into their systems readiness to roll back to old, pre-euro currencies.

As for Korea, local experts say there aren’t any government plans specifically targeted for the breakup of the euro zone.

However, both the government and financial companies have exerted a lot of effort on basic maneuvers such as shoring up gold and dollars in Korea’s foreign currency reserves, stress tests for the banking sector, beefing up cash holdings and strengthening risk management, among others.

Breaking up is hard to do

Perhaps because the worst scenario of a euro zone meltdown could reach catastrophic proportions to rival the fall of Lehman Brothers in 2008 - and European authorities would presumably do everything in their power to prevent such an eventuality - the predominant view among financial experts still maintains that a breakup of the euro zone is unlikely.

However, given that the possibility wasn’t even on the horizon for most market watchers - at least before a European stalemate to negotiate a clear breakthrough in the debt crisis began undermining market confidence in third quarter of last year - the number of experts who have been verbalizing their fears of a messy breakup is striking.

What experts call a “euro zone breakup” actually covers several scenarios of varying shock. The euro zone could get “divorced,” or negotiate a controlled break-up that might split into northern and southern European currencies to address the gap in the respective regions’ economic soundness.

It could also unravel piece by piece with the weaker countries failing to withstand their debt payments and unpopular austerity measures and choosing to unilaterally exit from the euro one-by-one.

The worst scenario is a sudden meltdown, where financial markets lose all confidence that the euro zone can find a politically workable, economically-viable exit plan - and stop lending to euro zone banks and governments. This would topple banks, tank the euro and the stock markets, triggering a global depression of 2008 global financial crisis proportions without any relief from last-minute bailouts.

No matter the endgame, the foreseeable risks are large enough that governments and companies have begun behind-the-scenes preparations for the still-remote eventuality.

Chief financial officers at the largest U.K. companies thought there is a one in three chance of at least one country leaving the euro this year, according to a survey released by Deloitte last week, following reports of U.K. Treasury considering plans to restrict the flow of money over borders while regulators met with banks to discuss the state of their preparedness in the event of a euro breakup.

Last week, struggling Italian lender UniCredit warned investors to be ready for a euro zone breakup, while global investment banks approached interbank trading systems provider Swift to check whether three-letter currency codes for defunct currencies like the drachma or lira were still usable in case a country yanks out of the euro zone. 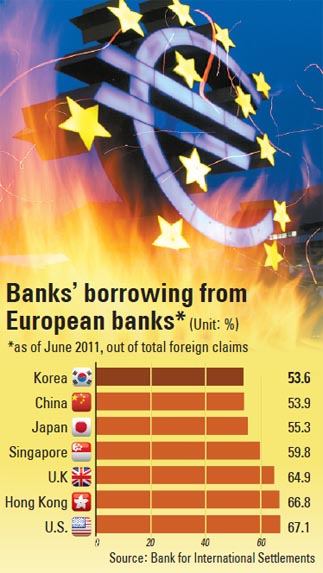 Top-level Korean officials have also begun publicly addressing the possibility of a less-than-smooth exit from the current euro zone crisis.

“I had my misgivings that the euro zone could break up without fiscal integration, since I had been a working-level deputy in charge of financial policy in 1992 when the Treaty of Maastricht was signed,” Financial Services Commission Chairman Kim Seok-dong said last month.

“I believed a breakdown likely because the lack of [a consolidated] fiscal preparation is a structural problem.”

However, experts said that the Korean government hasn’t set up contingency plans specifically targeted for a euro zone breakup.

“We are debating our plans for the euro zone situation at the national level, including at the weekly emergency meetings,” said Shin Jae-hyuk, an economist at the Bank of Korea. “However, I understand that there haven’t been any concrete discussions addressing the possibility of a euro zone breakup.”

One of the chief effects of the euro zone debt crisis has been the depreciation of the euro. The euro, whose value had peaked against the dollar to $1.59 in April 2008 during the U.S.-born financial crisis and was once seen as a candidate for key currency instead of the reeling dollar, had fallen to a mere $1.27 per euro last Friday’s market close, also driving down the relative value of euro-based assets.

As for Korea’s foreign currency reserves - the banks’ “last resort” line of credit and the means to defend the value of the won against volatile exchange rates - the Bank of Korea does not reveal how big a percentage is in euro-based assets such as euro zone bonds. As of last year they made up an unknown part of the roughly 37 percent in non-dollar assets out of the $306.4 billion in total reserves.

Lately, the central bank has redoubled efforts to diversify foreign currency holdings from dollar- and euro-based assets, increasing gold holdings from 0.4 percent to 0.7 percent as of December by buying 40 tons during 2011 alone. The purchases come after 13 years of no gold purchases.

“We cannot reveal the details of our portfolio, but we can say that there are nearly no investments being made to problematic regions,” said Shin.

“We invest in government bonds and other secure bonds from strong economies in the euro region which could be liquidated at any time.”

However, a dearth of viable investment outlets remains a problem. “Even if the Bank of Korea was to sell some of its European sovereign bond holdings, there is no viable alternative,” said Jung Young-sik, research fellow at the Samsung Economic Research Institute.

“However, continued diversification of asset holdings including gold and renminbi-based asset purchases since the financial crisis is a good sign.”

In the long term, high-ranking government officials such as Shin Je-yoon, Korea’s vice finance minister, has expressed the need to expand the total amount of foreign currency reserves to roughly $500 billion in order to effectively defend local banks’ health and the won’s value against volatile market forces.

As for commercial banks, more than half of Korean bank’s borrowing, or $187.3 billion, came from European banks as of June last year, according to data from the Bank for International Settlements. U.K.-based banks were the largest creditors, followed by France and Germany. Since then however, domestic banks have striven to minimize their exposure to European banks, and have undergone monthly stress tests conducted by financial regulators that seek to “guarantee” bank survival.