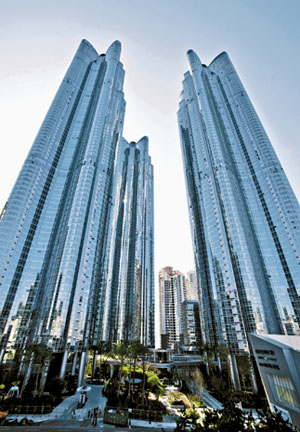 From the balcony of the penthouse of the 80-floor Doosan We’ve the Zenith building, a stunning view of Haeundae Beach and downtown Busan spreads out below. The landscape, full of 20-floor apartment buildings, seems like a metropolis in model miniature from this “zenith” of the city. On sunny days, Tsushima Island of the Japanese Archipelago is visible.

The average height of apartment buildings in Korea is on the rise. Eight years after the then-highest Tower Palace III was built in Dogok, southern Seoul in 2004, at 263 meters and 73 floors, the rankings among high-rise apartments have been changed. Haeundae Doosan We’ve the Zenith took the top spot, relegating Tower Palace III to third place in the country.

Two of the other tallest buildings in Korea include the Hyperion Towers in Mokdong and Richensia-Jungdong in Bucheon, Gyeonggi, which just began to allow residents to move in last month.

The first high-rise apartment in Korea was the 66-story Tower Palace I that appeared in 2002, accommodating 1,279 households. Since then, a total of 27,000 households occupy skyscrapers, or buildings that are at least 200 meters high.

The number of people living in high-rise buildings shot up due to the boom in development of higher buildings in the early 2000s when house prices rose sharply. 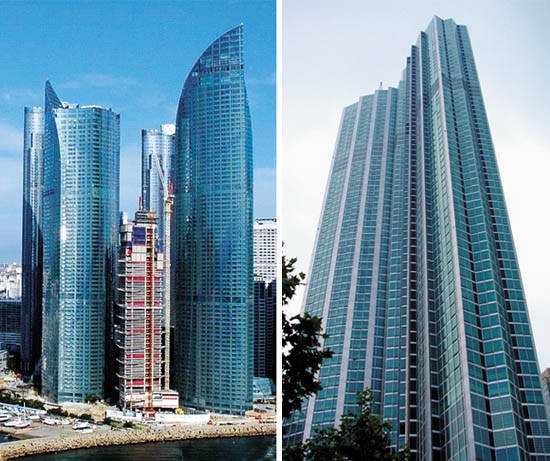 
However, the popularity of high-rise buildings hit its peak and has been on the decrease since the global financial crisis in 2008. Some newly built flats in skyscrapers in the country remain empty as demand has slowed down.

A new complex of apartment buildings in the Seoul metropolitan area is slated for completion soon, but only half of the flats have been sold. Another complex in a provincial area outside of Seoul was popular when it was first being sold, but not all of the buyers who planned to move in are now doing so.

“Undergoing the 2008 financial crisis has changed trends in the Korean real estate market from large and luxury houses to medium-size and practical ones, having negative impacts on those skyscrapers,” said Lee Nam-soo, a head of the real estate division at Shinhan Bank. 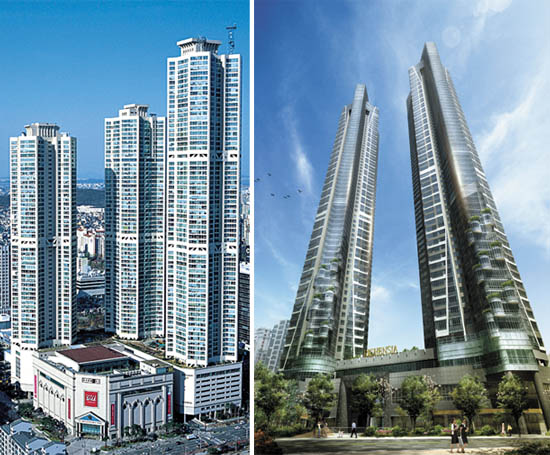 
Because of the change, high-rise apartment projects currently under construction are slow in developing, including ones in the Seongsu-dong and Ttukseom area in Seoul.

“Part of the problem stemmed from the recession in the housing market, but the problem also lies in the government regulation to put caps on pre-sale prices, taking away profits from construction companies,” an official at a local builder said.

Around 7,200 high-rise apartments are expected to be filled between 2013 and 2014 in the country. No more tall apartment buildings are planned for construction. However, experts expect that won’t be the end of tall apartments in the country. If the government regulation is loosened and the market recovers, people will again desire to live high in the sky.

“Despite the current decline, a demand for skyscrapers still exists,” said Kim Dong-soo, a senior official at Korea Housing Association.