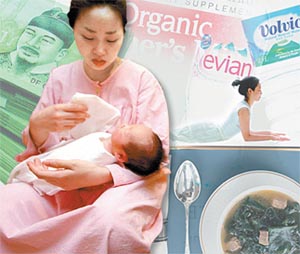 When Kang Nam-kyu, a 34-year-old banker, discovered that his wife was 10 weeks pregnant with the couple’s first child, he was overjoyed.

But then he started scouting for a postpartum care center, or sanhujoriwon, and the joy shriveled away. He called a center in Gangnam District but hung up after hearing the price: six million won ($5,190) for a two week postpartum course of treatment.

Kang’s wife had a better idea: for the same money, they could make a reservation at a center in Samseong-dong, southern Seoul, which has gained fame because it has used by celebrities, including Go So-young, a top actress.

Kang and his wife took a tour. The rooms were like those in a luxury hotel and the treatments included massages, skin care and a full spa.

“I was strongly determined that I wouldn’t spend that much money for a two week program,” Kang said. “But my wife said it might be a one-time event in our family, as we’ve planned to have only one baby. I had to make a reservation.”

In Korean tradition, women who have given birth shouldn’t exert themselves and are pampered in various ways. In the old days, the women would recover at their parents’ house, drink seaweed soup and bundle up, even in the summertime.

In modern Korea, clinics have arisen to substitute for a mother’s care, and they offer traditional postpartum care, called sanhujori - but for a price. And Kang isn’t paying anywhere near the top of the scale for the clinics. Some charge 12 million won for two weeks of pampering.

In research conducted by the Ministry of Health and Welfare, the average cost for using a care center was about 2.1 million won among a total of 481 postpartum care centers in the country as of August 2010.

“More than 200 postpartum care centers are located in Seoul and Gyeonggi and most of them are more expensive than in rural areas,” said professor Seo Young-joon at Yonsei University’s Medical Welfare Research Center. “In Seoul and Gyeonggi, the average cost gets increased by at least one million won.”

Young parents don’t hesitate to spend the money compared with their parents’ generation, Kim said, because they only have one or two children.

Yeom and his wife used a postpartum center in Nowon district, northern Seoul.

“I’ve also visited expensive centers in southern Seoul and they cost at an average of five to seven million won, which I couldn’t afford,” Yeom said. “I still feel sorry for my wife though.”

Banker Kang is booked into one of the high-priced centers and witnessed what it had to offer before he made his wife’s reservation at the Samseong-dong facility.

A consultant cited two key features that differentiated luxury care centers from standard sanhujoriwon. First, they only hire licensed nurses, not nursing auxiliaries. Second, pediatricians stay in the center and give medical treatment every day. In standard or low-priced centers, the consultant said, many nurses aren’t licensed and doctor visit once a week.

Each room offers a bed, a cot for the husband, a private bathroom and entertainment equipment like PCs and televisions.

They also have hip baths that help with the cleaning of the mother’s perineum region, which the center emphasizes, and pelvis correction, which is a common procedure in Korea.

In inexpensive centers, the baths are shared and don’t have a pelvis correction function, the consultant said.

If a couple chooses the 12 million won package, all the products for mother and a baby are imported. The water is Evian or Volvic from France, and the diapers are organic to protect the baby’s skin. The room is bigger, and the food becomes all organic.

Mother have two to three classes per day including yoga, postpartum body care, baby massage class and breast-feeding class. It is up to mothers whether they participate in these classes or not but the price doesn’t get discounted.

“I visited inexpensive centers in northern Seoul, which cost an average of two to three million won, but I wasn’t satisfied with their quality,” Kang said. “They rooms were small, they didn’t have windows, and only one pediatrician was taking care of more than 20 mothers and their babies.”

Sanhujoriwon have become a cultural phenomenon and a thriving business, but the government shows no interest in regulating the centers.

“We’ve conducted research on fees of more than 400 postpartum care centers in the country,” an official in the welfare ministry said. “But as far as we know, there is no movement to regulate them.”

“Currently, these centers are registered as service businesses like restaurants, not medical institutions,” said Shim Mi-young, a professor at the International University of Korea. “That means that they can frequently change their programs and their fees.”