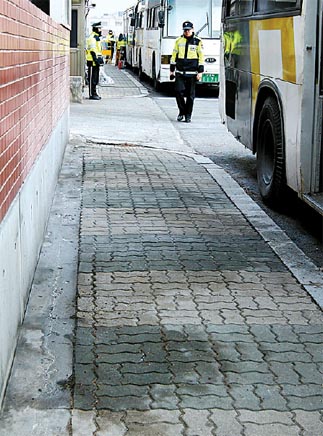 Stains from four Molotov cocktails can be seen yesterday on the ground near the Japanese Embassy in Jongno District, central Seoul. [YONHAP]

A Chinese psychotherapist wearing a T-shirt with the characters “apologize” on it threw four Molotov cocktails at the Japanese Embassy in Seoul yesterday.

The 36-year old man identified by the surname Liu, a resident of Guangzhou in southern China, said his maternal grandmother was a Korean from Pyongyang who had been forced into sexual slavery by the Japanese military during World War II.

He said he was “angered that Prime Minister Yoshihiko Noda avoided the issue of comfort women last December.”

According to police, who arrested him at the scene of the attack, Liu also claims to have set fire to the Yasukuni Shrine in Tokyo on Dec. 26. World War II war criminals are honored at the shrine, along with 2.5 million Japanese war dead.

The Yasukuni Shrine’s 13-meter-high wooden Shinmon gate was burned at 4:05 a.m. on Dec. 26, though the fire was put out quickly, leaving the bottom of the left gate slightly charred.

According to the Mainichi Daily News, Japanese police suspect arson because traces of a kerosene-like fuel were found on the gate, two sake bottles with a small amount of oil in them were discovered at the scene and a man torching the gate was captured on a security camera.

The Jongno police said Liu lit and threw four handmade Molotov cocktails at the Japanese Embassy building in Junghak-dong, Jongno District, central Seoul, at 8:18 am. yesterday and was caught at the location.

Liu claims he is a psychotherapist in China, according to the police. He says he left Guangzhou to volunteer to help cleanup efforts in post-tsunami Japan last October, and supposedly spent two months working in Fukushima Prefecture.

He left Tokyo and arrived at Incheon International Airport on Dec. 26 at 11:50 a.m., the day of the fire at the Yasukuni Shrine.

Police said Liu claimed to have stayed in Incheon for several days then moved to a motel in Seodaemun District, central Seoul, on Dec. 31.

Liu allegedly purchased gasoline in two two-liter bottles at a nearby gas station and then transferred the gasoline into 11 empty soju bottles.

He carried the 11 bottles in a bag to the Japanese Embassy and threw four of them at the building yesterday morning. Two landed on a second-floor balcony.

Seven people were in the embassy at the time. There were no injuries or damage to the building.

Liu was trying to escape when caught by police guarding the area and arrested. He was wearing a T-shirt with “apologize” in Chinese characters.

The police is looking into Liu’s family background and whether he might have had accomplices.

Former “comfort women” and their supporters celebrated their 1,000th weekly protest in front of the Japanese Embassy in Seoul last month to demand an apology from Japan’s government and compensation.

The 1,000th protest received a lot of publicity around the world. A bronze statue of a young girl was erected in front of the Embassy on Dec. 14 as a symbol of permanent protest.

At a summit in Kyoto on Dec. 18, President Lee Myung-bak requested an official Japanese apology and compensation for the so-called comfort women, Japanese Prime Minister Noda rejected the request and asked that the statue in front of the embassy be removed. Japanese newspapers gave wide coverage to the disagreement.