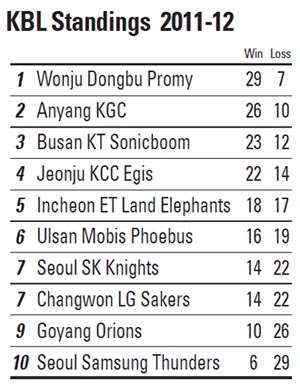 No big changes have swept across the Korean Basketball League in the first week of the New Year as the Wonju Dongbu Promy continued its dominance at the top of the standings.

The Promy, led by coach Kang Dong-hee, won all three games last week, but extending the winning streak won’t be an easy task.

The biggest challenge and most anticipated game of the week is set for tomorrow: The Promy will host second-place Anyang Korea Ginseng Corportation.

If KGC wins this game, the gap between the two teams in the standings will be reduced to only two games, heating up the regular-season title race.

But if the Promy continues its home-court domination, the team is one step closer to a regular season title with a widened lead and a strong head-to-head record with championship-hopefuls.

The previous four encounters, however, proved to be competitive matches that went down to the wire. The largest margin of victory was a mere seven points, with the Promy beating KGC 60-53 on Jan. 1.

KGC’s ability to play a fast-paced, aggressive style throughout four quarters will be the key to the game. This season has shown that KGC often takes the lead until the third quarter, but fails to follow through in the clutch.

The Promy’s other games this week will be on the road, with away matchups against the Incheon ET Land Elephants on Friday and the Changwon LG Sakers on Sunday, both formidable opponents for the Promy.

The Elephants’ snapped the Promy’s five-game winning streak two weeks ago and the Sakers have split head-to-head matchups against the Promy this season.