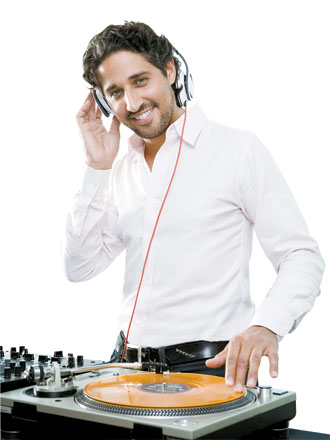 When Michaelangelo L’Acqua first met Tom Ford, he had absolutely no idea who he was.

“I thought he [Tom Ford] was somehow related to Ford trucks!” he said.

Not knowing him, it turns out, worked in L’Acqua’s favor, because it gave him the gumption to approach him. From there, he started to carve out a unique career for himself as a music director for Gucci and Yves Saint Laurent.

As Ford ascended to the top of the global fashion scene during the late 1990s and early 2000s, L’Acqua mixed music with fashion and created soundtracks for fashion runway shows.

L’Acqua then went on to become one of the most successful music directors for high fashion designers, producing runway shows for Ralph Lauren, Jil Sander, Michael Kors and Tommy Hilfiger, among other top design houses. In addition to this, he also scored and licensed music for around 200 commercials, including for Revlon and Old Navy.

The Korea JoongAng Daily caught up with L’Acqua to talk about his connection to the legendary Tom Ford, his unusual job title and his musical heroes.


Q. Your music career started in the fashion industry. In 1999, you were named music director for Gucci and YSL. How did that happen? How did you manage to get hired by Tom Ford?

A. I began producing music for fashion shows in the late ’90s through simple word of mouth and found myself auditioning for the amazing Tom Ford. He liked what he heard and the rest, as they say, is history.

When did you first meet Tom Ford? What was it like working for him and Yves Saint Laurent?

Ironically, the first time I met Tom Ford, I actually didn’t know who he was. This naivete actually made for an incredible meeting, as I walked right up to him without any hesitation. I think he liked that I wasn’t intimidated by him as everyone else usually is. However, I will say that eventually, working for Tom was one of the most intense moments of my entire life in the creative world. He’s a man who had such unbelievable vision in what he wanted to accomplish in fashion and in life.

After Gucci, you produced music for runways in Paris, Milan and New York. Which designers have you worked with? Who was the most impressive designer you’ve worked with?

I’ve been fortunate to have worked with some of the biggest names in fashion, producing over 150 fashion shows in Paris, Milan, Berlin and New York for the likes of Ralph Lauren, Tommy Hilfiger, Michael Kors, John Varvatos, Jil Sander, Chanel and Diane Von Furstenberg. As I mentioned in my last answer, I really do think Tom Ford was the most incredible. I admire his work ethic and vision so much.

In your opinion, what is the role of music in runway shows?

The role of music on the runway is to bring the brand and the collection to life in a way that heightens the senses.

When did your love of music and music production start?

I’ve been enamored with music since I was a kid. I studied it at The New School for Jazz & Contemporary Music. After college, I played in funk and soul bands, but I wanted to be part of the bigger picture and moved into production.

Your current job title, global music director for a hotel chain, is somewhat of an alien concept to me. What exactly is your role?

The concept might seem a bit alien, as W is the first and only hotel brand to create such a position! I think I was a natural fit for W, though, as I also have extensive experience in programming music for fashion brands, and W has an equally strong passion for fashion. W also recognized my knack for helping define the identity of a brand through music, which is what I have done in the past for commercials, runway shows and films.

How does the W brand translate into sound?

W is more than a hotel brand, it’s a lifestyle, and the music reflects the different sensory experiences of being at a W Hotel. For example, I had the opportunity to create a variety of different playlists when curating tracks for W’s iPhone application. There’s an upbeat track list for [W’s gym] Sweat and a more relaxed, soulful vibe for the Retreat playlist [which reflects the vibe of W Retreats in Vieques, the Maldives, Ko Samui and Bali].

However, the one main theme of all the music I choose for W - be it a live performance or CD -is that it has to reflect who’s new and next.

Tell me about “Symmetry,” the music program you developed.

Symmetry Live is an ongoing live music concert series that brings who’s new and next in music to W Hotels across North America. Over the last few years we have featured performances from Janelle Monae, Cee Lo Green, Ellie Goulding, Neon Trees and, most recently, Phantogram.

What are the differences you feel in composing music for the runway and composing for a hotel?

Composing music for a runway show is very theatrical, and you’re telling a very specific story. Creating music platforms for a hotel is a larger endeavor, one that is not so narrow - you have a chance to really curate an experience through music.

When producing music for fashion, film or events, what are some of the most important factors you take into consideration?

I make sure to really get to know the designer or filmmaker, to learn their vision, and to see how I can create a soundtrack to that vision. I also think about their audience. Like when I am working on a playlist or choosing an artist for a W, I think about what hotel, what city we will be in. The audience should dictate the music.

Who were your favorite musicians and DJs growing up? What kind of music do you listen to now?

Growing up in New York City, I listened to a wide variety of musical genres. From classical music to hip-hop, rock ’n roll and soul. I was always drawn to those individuals who stood out in each genre and had a unique voice with a musical point of view. Artists such as The Stones, Led Zeppelin, Marvin Gaye, Stevie Wonder, Run DMC, the Beastie Boys, Vivaldi and Bach had a big influence. I have a voracious appetite for music and listen to everything I can get my hands on. I must admit, though, that electronic music right now is offering the most creative voice in all the genres that I listen to. There is so much amazing music that is released every day in this scene.

What projects are you working on outside of your work with the W Hotel?

I was just in Shanghai as music director for Elite Model Look 2011, a two-hour TV show whereby Elite scoured the globe to find their next top supermodel.

I’ve also started a new record label and I am currently searching for emerging artists to sign.

DJing continues to be a huge passion of mine, and I will be DJing throughout the world this next year as well as continuing to produce fashion shows in Milan, Paris and New York City.

Could you give our readers your top five picks for albums to listen to celebrating the new year with friends or family?

Gotye, his voice is electric and his songwriting brilliant. Carl Hammond, Jr., he is the next guitar legend after the likes of Jimi Hendrix. Azari & III, an electronic dance group that is doing some amazing stuff right now. Alexander, he is an amazing songwriter and his voice is haunting and draws you into each song. And lastly, Phantogram, they have a beautiful balance between dark emotional music that still makes you feel good.