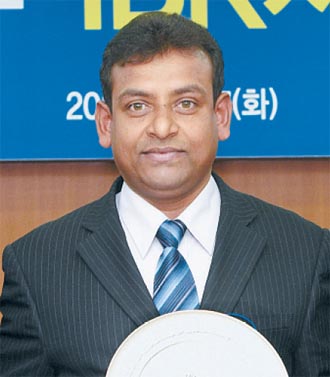 When 39-year-old Bangladeshi migrant worker Alam Mohammad Jahangir came to Korea in 1995, he set himself the goal of providing better living conditions for his family than he used to have in his hometown. He has worked diligently and saved most of the money he has earned in the last 15 years. Finally his dream is becoming a reality.

The Industrial Bank of Korea last month named Jahangir as a loyal customer during a promotional event aimed at inspiring more people to save. Jahangir was awarded a special prize - a round-trip airplane ticket to his home country. The bank said that he has been saving 1.5 million won ($1,293) per month for more than a year. Jahangir earns 2 million won per month. Jahangir said he has earned more than 30 million won. After the news, his company readily gave him one month of vacation time, allowing him to visit his home country and spend time with his family. He said that he will apply for Korean citizenship as soon as he gets back from the trip.

“I really wanted to make my dream come true,” he said. “Since I’ve been in Korea, I’ve always thought that I want to bring my family to Korea and live in my own house with them. Well, it’s only the first step, but I’m extremely happy that I can get citizenship.” He continued, “I need to show my financial capability to the Korean government in order to be a Korean citizen.

“So, I have been saving most of my earnings. It wasn’t easy but I could endure everything when I think about my family.”

Jahangir came to Korea in 1997 and has been working as a plastic manufacturing engineer in a factory located in Hwaseong, Gyeonggi. It wasn’t an easy life for him in the beginning, but he never gave up, tried to stay close with his Korean workers and learned Korean from them.