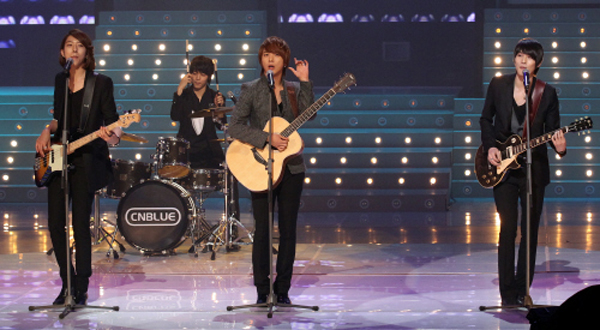 K-pop group CN Blue proved popular in Hong Kong, as fans swarmed the airport to greet them over the weekend.

Some 200 fans of CN Blue flocked to the airport to see the band arrive in Hong Kong on the morning of Jan. 7. The band was in town for its “CN Blue 2012 Asia Tour: Bluestorm.”

The large number of fans prompted airport security to employ 30 personnel to escort the band from the airport.

The band’s agency said that its success in Hong Kong could be attributed to its leader, Jung Yong-hwa.

“Jung’s popularity in Hong Kong is phenomenal because he was in the hit drama ‘You’re Beautiful’ and appeared in an episode of the Hong Kong variety show ‘Running Man,’” a representative from the agency said.

The band’s next gig is slated for Feb. 28 in Taiwan, where the band is quickly becoming popular.

On Jan. 2, the band topped music charts maintained by Taiwanese phone companies with the songs, “You’ve Fallen for Me” and “Because I Miss You.”

Both songs are from the soundtrack for the MBC drama “You’ve Fallen for Me,” which aired in August in Korea.