Paul Scholes comes out of retirement for United

Paul Scholes comes out of retirement for United 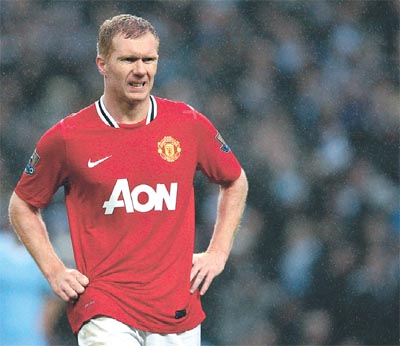 MANCHESTER, England - Seven months after his career seemingly ended with a gloomy loss to Barcelona, Paul Scholes surprisingly returned to action Sunday to help injury-hit Manchester United’s pursuit of trophies in the second half of the season.

Scholes came on as a substitute to help United end neighbor Manchester City’s FA Cup defense with a 3-2 victory in the third round - just a couple of hours after the announcement of his comeback stunned even his own teammates.

“I was surprised, we didn’t find out until we got to the dressing room,’’ striker Wayne Rooney said after providing two of United’s goals. “I think someone asked him what he’s doing.’’

Some fans may have been asking the same thing about the 37-year-old midfielder when he showed some signs of rust just five minutes after replacing Nani on the hour. Scholes gave the ball away to James Milner, whose resulting cross led to Sergio Aguero scoring City’s second.

But after seeing a low shot saved by City goalkeeper Costel Pantilimon, Scholes helped United run the clock down by frustrating the hosts in the closing minutes at Etihad Stadium.

It ensured United won at its neighbor for the first time since Scholes scored the winner in April 2010 during one of his 10 Premier League title-winning campaigns.

“I’ve been pretty clear since I stopped playing that I miss it,’’ Scholes said. “I’m delighted the manager feels I can still make a contribution to the team. I’m looking forward to playing my part in trying to bring more success to this great club.’’

Since retiring after the 3-1 loss to Barcelona in the Champions League final in May, Scholes had been working as a coach at United.

“He came to see me and said he wanted to come back, he was missing it too much,’’ United manager Sir Alex Ferguson said. “There were no negatives as far as I’m concerned. The players were fantastic about it, the fans I’m sure will be happy and I’m happy.’’

The move came immediately after United lost two consecutive matches to leave the defending champions three points behind neighbor City in the Premier League title race, having already been knocked out of the Champions League at the group stage.

Ferguson now has Scholes back among his midfield options for the rest of the season, with Darren Fletcher out for an indefinite period with a bowel disease and Tom Cleverley also sidelined.

“It’s great, it gave everyone a lift,’’ Rooney said. “He’s a fantastic player.’’

The former England midfielder scored 150 goals in 676 previous appearances for United over 17 years.

“It’s always sad to see great players end their careers, but especially so when they do it early,’’ Ferguson said. “But he has kept himself in great shape and I always felt that he had another season in him. It’s terrific to have him back.’’

Starting his career as a deep-lying forward, Scholes eventually dropped back into central midfield where his touch, technique and vision could be more effectively utilized. He never lost his eye for goal, though, and turned his late runs into the penalty box into an art form, while also being a threat with his fierce shots from distance.