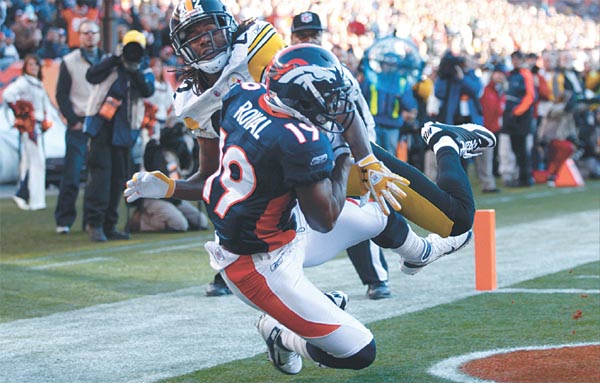 
DENVER - Broncos quarterback Tim Tebow connected on an electrifying 80-yard touchdown pass on the first play of overtime to give the Broncos a stunning 29-23 win over the Pittsburgh Steelers in the AFC wildcard game on Sunday.

Demaryius Thomas hauled in the pass at the Denver 38, stiff-armed one defender and then out-raced another to the end zone. The whole play took just 11 seconds of overtime, making it the quickest ending to an extra period in NFL history.

Tebow, who looked as startled as everyone else, headed for his own end zone and knelt on one knee to give thanks to God - a gesture known far and wide these days as Tebowing. Then he pounded a fist in triumph and took a victory lap.

Tebow’s 316 yards passing for the game was the key to moving the Broncos (9-8) into the second round of the playoffs next Saturday, when they will travel to play the top-seeded New England Patriots.

He also scrambled for a 14-yard gain and sparked the team to their first playoff victory since the Super Bowl win over undefeated New England four years ago.

Next up is just as big a challenge for the Giants (10-7): on the road at the defending champion Green Bay Packers next Sunday. New York lost 38-35 to Green Bay in December.

The tempo in Sunday’s game, the first playoff game at MetLife Stadium, was set by New York’s defense, which never allowed Atlanta to get going.