Daum founder lashes out at FKI over SK petition

Daum founder lashes out at FKI over SK petition 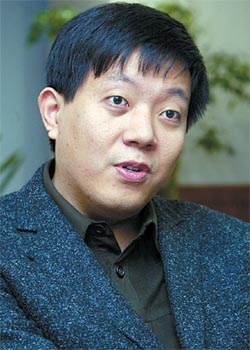 Controversy is brewing over the country’s largest business lobby group’s recent act in defense of the chairman of SK Group, who was indicted on charges of embezzlement on Thursday.

“The FKI doesn’t understand what entrepreneurship really is,” Lee tweeted on Friday. “Are there connections between a breach of trust, embezzlement, slush funds and entrepreneurship?”

Chey, 50, is suspected of misappropriating part of a 180 billion won ($155.1 million) investment fund set aside by 18 affiliates of the country’s third-largest business group. His younger brother, Jae-won, was arrested over the same charges.

Lee’s post went viral, catching the attention of the media.

It is a rare situation in which a high-profile entrepreneur has strongly spoken out against the lobby group, which represents most of the leading businesses in Korea.

Lee added on his Twitter account that the board of directors should be held accountable for the embezzlement allegedly committed by management.

“Even if it wasn’t an act of embezzlement, the board needs to repair the system that has invited such dubious practices,” he said.

Lee also accused nonexecutive directors of SK Group and the inspection committee of not doing anything. “Why don’t they say anything? That’s kind of a dereliction of duty. They should have made an excuse or taken responsibility,” he said.

In late December, five business lobby groups including the FKI submitted a petition requesting leniency on the SK chairman, citing that indicting Chey would weaken entrepreneurship, which has been the driving force of the country’s economic growth.

“Not only the FKI, but also four other business organizations, including the Korea Federation of Small and Medium Business, handed in a joint petition to the prosecutors,” an FKI official said.

According to the official, the business organizations mentioned entrepreneurship in the broad sense that conglomerates contribute to the national economy by making large investments.

“SK Group is one of the conglomerates that makes investments aggressively,” the official said. “It would be a loss for the economy if both of the brothers of SK go behind bars.”

But Lee found the business lobbyists’ argument offensive. His message was retweeted more than a hundred times. Lee has over 1,700 followers on Twitter.

“I heard that the FKI asked the prosecutors not to indict Chey, who stole the company’s money,” Cha said. “He owns less than a one percent stake in the company, but spent 50 billion won as if it was his own money. That’s stealing.”

The lawmaker then continued criticizing the FKI. “The FKI should withdraw SK Group, or it should stop speaking on behalf of the business community under a slogan of a ‘free market economy,’?” he said.

SK Group, beleaguered by recent gossip on the Internet, refused to comment on the situation. The group has been struggling to recover its corporate image by belatedly unveiling the largest-ever investment and employment plans this year.

On Jan. 5, the prosecutors wrapped up the 7-month-long police investigation on SK Group by announcing the chairman’s indictment without physical arrest. However, the prosecutors issued an arrest warrant for Jae-won in December.

It’s not the first time that the group has been probed. In 2003, then-chairman of SK Corporation Chey Tae-won was indicted by prosecutors on charges of a 1.5 trillion won accounting fraud at SK Global.

Chey was sentenced to three years in prison with five years of probation in 2008. However, he was given special amnesty by President Lee Myung-bak on the Liberation Day in the same year.