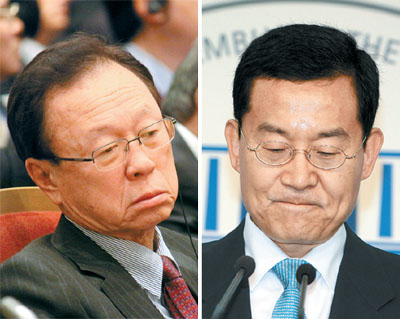 Representative Koh Seung-duk of the Grand National Party yesterday confirmed that National Assembly Speaker Park Hee-tae tried to buy his vote during the 2008 chairmanship election of the ruling party, fueling suspicions that more votes were bought.

Koh, a 55-year-old first-term lawmaker representing Seocho B District of Seoul, held a press conference yesterday afternoon to confirm some details about his revelation about the GNP leadership election. Koh said that Park appeared to have tried to buy votes of other GNP lawmakers to become chairman, instantly driving the ruling party into a panic.

It appeared inevitable that the prosecution would question the incumbent National Assembly speaker.

Koh first revealed the bribery attempt in a newspaper column on Dec. 14. While the claim did not generate much reaction at the time, the issue was revisited by a cable TV network on Jan. 3, right in the middle of the ruling party’s efforts to reform itself to stop its plummeting popularity ahead of the April legislative election.

In the press conference yesterday, Koh identified Park, who headed the GNP from July 2008 to September 2009, as the person who attempted to buy his vote before the leadership election in 2008 with an envelope stuffed with 3 million won ($2,600) in cash. “I have told the prosecution everything I know,” Koh said at the press conference. “It was about the envelope full of money from the July 3, 2008, leadership election. I gave details and the testimony to the prosecutors in such detail that it reached 67 pages.”

Koh showed up at the prosecution on Sunday as a witness, and his 11-hour questioning at the Seoul Central District Prosecutors’ Office ended around 1 a.m. yesterday.

Addressing the press at the National Assembly yesterday afternoon, Koh said he felt the responsibility to inform the public about what had happened. “Money-ridden leadership elections have been an evil tradition in the 50-year history of Korea’s party politics,” Koh said. “Neither ruling nor opposition parties are free from it. I hope this incident will serve the advancement of politics.”

According to Koh and prosecution sources, a man visited Koh’s office on the eve of the 2008 GNP chairmanship election and handed over a manila envelope to Koh’s female secretary, only identified as Lee. She forgot to give it to Koh until a day after the election. Koh said the manila envelope contained three white letter envelopes, each containing 1 million won. Park’s name card was inside, Koh said.

Koh said he ordered another aide to return it immediately. The lawmaker also said his female secretary recalled that the messenger was a man in his 30s wearing black-framed glasses and carrying a bag filled with several manila envelopes, which suggested that other lawmakers were given bribes.

Koh and the prosecution sources said the aide returned the manila envelope to an aide to Park.

“I was told by my secretary that the messenger was carrying a larger bag with the same manila envelopes,” Koh said. “Based on her account, I believe he probably visited other lawmakers’ offices and delivered money.”

Based on Koh’s testimony, the prosecutors yesterday summoned two former aides of the lawmaker and asked about the incident.

As Koh identified Park as the suspect, the incumbent National Assembly speaker will inevitably be questioned by the prosecution. Park has denied the accusation and left for Japan Sunday for an 11-day, previously scheduled Asia trip.

If the prosecutors decide to summon Park, he will be the first incumbent National Assembly speaker to appear before the prosecution as a criminal suspect. In the past, former speakers of the legislature were investigated on charges of receiving bribes, but the investigations all took place after their terms ended.

During his term as National Assembly speaker, Kim Soo-han faced an investigation in 1997 over the Hanbo Group’s influence-peddling scandal, but prosecutors paid a visit to his residence, taking into account Kim’s status.

Prosecutors began preparation yesterday to question Park. Prosecutors from the Special Investigation Unit and Financial and Tax Crime Unit were dispatched to the team investigating Koh’s accusation yesterday, hinting that the probe was expanding.

Some local media reported last week that Kim, who served as Park’s chief of staff during his GNP chairmanship, had delivered the money to Koh’s office. Kim denied the accusation and threatened legal action against the reports.

At the press conference, Koh also said he had received a phone call from Park’s office after he returned the money but refused to say who telephoned him or the specifics of the phone conversation.

Stressing that the 2008 leadership election was the first and the last time that he had seen envelopes stuffed with cash since he became a lawmaker in 2008, Koh said he decided to reveal the past because he wanted to see a fundamental reform in the political arena. Saying opposition politicians were equally guilty, Koh said, “We must come clean about the evil past practices and step forward to new politics.”

While Park continued to deny the accusation, ruling and opposition parties demanded he give up his National Assembly speaker post to allow the prosecution to thoroughly investigate him.

Koh’s remarks at the press conference that there could have been other lawmakers who received money from Park instantly pushed the GNP into a panic, as prosecutors are expected to summon more suspected bribe-receivers. With three months left before the next legislative elections, the scandal is expected to deal a fatal blow to Lee Myung-bak loyalists who had largely supported Park’s campaign in 2008.

As Lee loyalists worry about their fate, reformists demanded yesterday that the GNP must disband itself to create a new political party. “There isn’t a day left in the GNP’s life,” Representative Chung Doo-un said. “How can we ask the voters to support us? We have to dismantle and restart.”

Representative Gu Sang-chan, a key supporter of the GNP’s emergency leader Park Geun-hye, said lawmakers representing Seoul and its vicinities are in an utter panic. “Many lawmakers agree that we can’t just stay where we are and that we must create a new party,” he said.

The Democratic Unity Party’s co-chairman Won Hye-young said yesterday that Park must resign from his post.