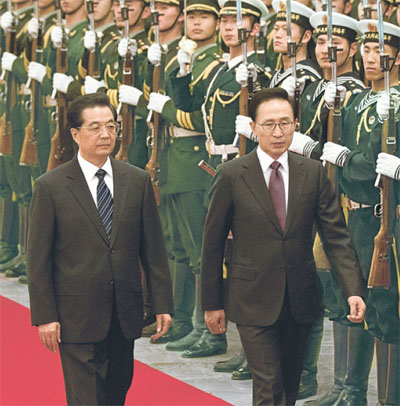 South Korean President Lee Myung-bak, right, walks with Chinese President Hu Jintao as they inspect an honor guard during a welcome ceremony at the Great Hall of the People in Beijing, yesterday. [AP/YONHAP]

Lee communicated the intention to Hu during their summit talks in Beijing, said Kim Tae-hyo, deputy national security adviser to President Lee. Once Seoul completes its local procedures, it is possible the two sides could announce the start of formal trade talks in the first half of this year.

However, Kim said he can’t rule out a delay in launching free trade talks with China if exploratory talks to set parameters for any deal hit a snag or the move faces local resistance.

It was the first summit for Lee and Hu since North Korean leader Kim Jong-il died of a heart attack on Dec. 17, raising concerns that the abrupt death could disturb the status quo that has kept stability on the volatile Korean Peninsula.

The two leaders had “an in-depth discussion” about the situation on the Korean Peninsula and agreed to “work together for the sake of peace and stability,” the official said.

Since Kim’s death, his young and untested son, Kim Jong-un, has taken the helm of Pyongyang. Although the sensitive transfer of dynastic power to the new leader, believed to be 30 or 29, seems to be running smoothly, experts question whether the young Kim can consolidate his grip on power.

Little is known about the North’s new leader and the succession process has been shrouded in secrecy. Many analysts have forecast that Pyongyang may launch another provocation this year to solidify its internal political order.

China, which has diplomatic relations with the two Koreas, is economically close to South Korea, but is North Korea’s main benefactor and ideological ally.

During the summit, Lee and Hu agreed to develop the strategic cooperative partnership between the two nations as they mark the 20th anniversary of establishing diplomatic relations, the official said.

Since 2008, South Korea and China have held a series of joint feasibility studies on a possible free trade deal and reached an agreement to exchange views on sensitive issues.

China is the largest buyer of South Korean-made goods and has contributed to Seoul’s sizable trade surplus in recent years, while South Korea is China’s third-largest trading partner after the United States and Japan.

Bilateral trade between the two reached $188.4 billion in 2010. Both countries are expecting the volume to top $300 billion in 2015, according to Seoul’s Ministry of Foreign Affairs and Trade.