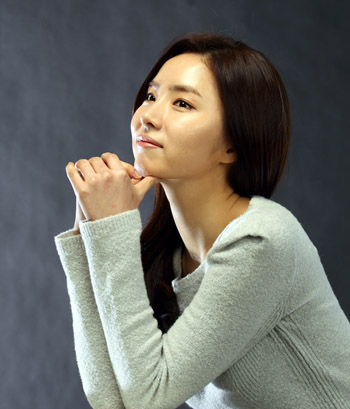 Last year was meaningful in many ways for actress Sin Se-gyeong because she proved she is more than a pretty face. Through her appearances in the film “Hindsight” and the drama “Deep-rooted Tree,” the 22-year-old actress demonstrated she could hold her own against her co-stars, Song Kang-ho and Han Seok-kyu, both of whom are established actors with more than two decades of experience in the business.

After making her debut as the model on the poster for Seo Tae-ji’s album “Take 5” at age 13, Sin shot to stardom. But she kept a low profile and lived the next five years as an ordinary student.

She returned to acting in a handful of minor roles, but it was her role on the hit sitcom “High Kick Through the Roof” (2009-10), where she appeared in a supporting role as a young woman who works as a housemaid in order to take care of her younger sister, that propelled her into the limelight again.

Then she was cast in “Hindsight” as an assassin and in “Deep-rooted Tree” was a lady-in-waiting who plays a crucial role in creating the Hunminjeongeum, a document describing the Korean language.

Ilgan Sports, the JoongAng Ilbo’s sports daily, recently caught up with Sin to talk about acting and life.


Q. It sounds like last year was a hectic one for you.

A. Yes it was. I did the film “Hindsight” and landed a role in the SBS drama “Deep-rooted Tree” right after that. I learned a lot from my fellow actors as I was doing both projects.

You’re paired with actor Song Kang-ho in “Hindsight” and Han Seok-kyu in “Deep-rooted Tree.” What was it like to work with veteran actors with more than 20 years of experience?

I was very nervous in the beginning. They’re both much older than me, so it was intimidating to work with them. After working on both projects, I realized that, in some ways, it’s more comfortable for me to work with actors and actress who are older than me. I think that working with Song and Han helped me grow as an actress.

The period drama “Deep-rooted Tree” was named best drama by SBS late last month. What does that mean to you?

It was a great honor to be part of it. It was such a well-made work, and the scripts were always better than I expected. Shooting the drama was a great fun, and it felt like I was going on a picnic whenever I headed down to the set.

What was it like on the set of the drama?

It was extremely cold, but I had to wear a hanbok (traditional Korean garment). The garment doesn’t really show the shape of the body, so I bundled up as much as I could. Once I even wore nine shirts and pairs of pants underneath. It was almost like an experiment in how many layers I could wear. Later, I discovered the perfect combination. I attached heating pads to a sweatshirt and sweatpants and wore a different set of sweats with heating pads attached over that.

You were criticized at one point for your acting in the drama, but the last scene of the final episode, where your character So-yi wrote “Hunminjeongeum Haerye” (a commentary on Hunminjeongeum), as she was dying was really moving. After that, no one criticized you. How does that feel?

I appreciate what the writers did to make my character die in such a moving way. I assume that was because the writers were fond of the character. I liked her because she is different from other female characters who are passive.

You were recently chosen as the most photogenic actress of last year by a panel of photographers with the Korean Visual Arts Festival. What did that mean for you?

I took it as a big compliment, and it meant that I was expressing myself well. You can’t always look pretty when you act, so it meant that I’m more than just a pretty face.

Acting must be stressful. What do you do when you are stressed out?

I share almost everything about myself with my mother. I’m not a good daughter in some ways. But she is my best friend. My mother and I chat and go out and eat things we love. That’s how I relieve stress.

I love listening to K-pop. I’m a fan of Girls’ Generation and the Wonder Girls. Aren’t they pretty? Seeing them perform gives me energy. These days, I’m also listening to IU.

You’re a picture-perfect beauty, but do you ever get jealous of other actresses?

There are so many beautiful actresses around. Personally, I think Song Hye-kyo is the best. I’m a long-time fan, though she doesn’t know it.

How do you keep fit?

I only eat rice. But I ate boyak [a type of Eastern medicine prescribed to boost health and the immune system] while I was working on the drama series.

What are your plans for the coming year?

Keeping fit is the most important thing for me. I also want to give my all to the new drama series “Fashion King” that airs on SBS in March. My character is perky and bright, so I’m very excited to play her.

What is your ultimate goal in life?

I want to enjoy every part of my work.