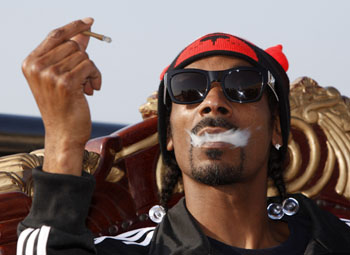 Hudspeth County sheriff’s office said in a statement that Snoop Dogg, whose name is Calvin Broadus, was arrested Saturday at the Sierra Blanca highway checkpoint and cited for possession of drug paraphernalia, a misdemeanor typical in cases involving small amounts of marijuana.

According to the sheriff’s office, a border agent smelled marijuana smoke coming from the bus and ordered everyone off so that a dog could inspect the vehicle.

A prescription bottle with several marijuana cigarettes was found in a trash can, and more marijuana was found in two other containers. In all, 0.13 pounds of the drug were found.

Broadus admitted the drug was his and was released, the sheriff’s office said.

Broadus’ agent didn’t immediately respond to a request for comment Monday. In interviews, the rapper has said he has a license to use medical marijuana in his home state of California because he suffers from migraines and blurred vision.

County Judge Becky Dean Walker says paraphernalia citations are typically handled by justices of the peace in the county and that they are resolved by a no contest plea and a mailed-in fine of up to $500.