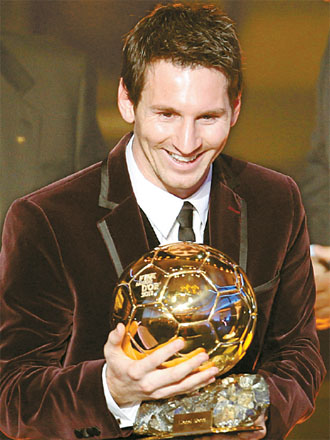 ZURICH, Switzerland - Already judged one of football’s all-time greats at just 24, Lionel Messi unsurprisingly extended his reign as the world’s best player for a third year on Monday.

The Barcelona and Argentina forward received the FIFA Ballon d’Or award for 2011, beating his club teammate Xavi Hernandez and Cristiano Ronaldo of Real Madrid to the game’s most prestigious individual honor.

“It’s a huge pleasure for me,’’ Messi said, after accepting the trophy from another three-time winner, former Brazil forward Ronaldo. “It’s the third time I get this award, and it’s a huge honor.’’

Messi received 47.88 percent of the points in votes cast by national team coaches and captains plus invited journalists. They chose from an original shortlist of 23 players.

Cristiano Ronaldo finished second with 21.6 percent and Xavi got 9.23 percent to finish third for the third straight year.

“This one is very special because I want to share this with my friend and teammate Xavi . He deserves it,’’ Messi said.

On a night of Barcelona dominance, the Catalan club inflicted another defeat on its great rival Madrid in the men’s coaching award.

Barca’s Pep Guardiola was chosen ahead of Madrid’s Jose Mourinho and Alex Ferguson of Manchester United. Mourinho and Ronaldo did not attend, as Madrid plays a Spanish Cup match Tuesday in Malaga.

Sawa led Japan to win the 2011 Women’s World Cup and adds the FIFA prize to her tournament best player and top scorer trophies.

A major international tournament victory is all that now eludes Messi.

Guardiola and Ferguson agreed at an earlier news conference that Messi should be classed alongside legends such as Pele, Diego Maradona and Alfredo di Stefano.

“Now he can sit beside them. It’s a huge award, no?’’ Guardiola said.