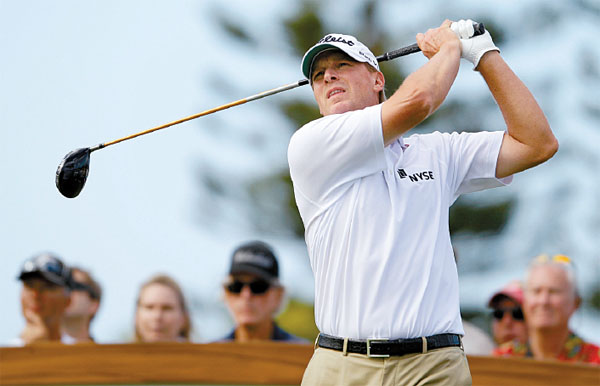 Steve Stricker watches his drive from the third tee during the final round of the Hyundai Tournament of Champions golf tournament in Kapalua, Hawaii, Monday. [AP/YONHAP]

Stricker, who turns 45 next month, captured the $1.12 million top prize in the matchup of last year’s PGA tour winners, which was without 2011 major champions Darren Clarke and Rory McIlroy of Northern Ireland and South African Charl Schwartzel.

“It was tough,” Stricker said. “I never let up but it’s always tough trying to win. It’s even tougher playing with a lead like I had. In the end I got the ball in the hole.”

Stricker, the only player to win multiple titles in each of the past three U.S. PGA seasons, took the 12th title of his career, his first since capturing his third consecutive John Deere Classic crown last July.

The triumph was Stricker’s eighth in the past 32 months and moved him up to fifth in the world rankings, the highest spot of any American.

Stricker, who began the day with a five-stroke edge, opened with five pars before his lone bogey at the par-4 sixth, having missed solid birdie chances while rivals closed the gap.

“I felt it kind of slipping away but I was patient, frustrated but patient,” Stricker said. “I told myself if I could get a couple back by the turn I would be all right.”

Stricker responded with birdies at the par-3 eighth, par-5 ninth and par-4 12th to rebuild his confidence.

“That birdie at eight calmed me down quite a bit,” he said.

Stricker reached the tee at the par-4 16th with a two-stroke lead over defending champion Byrd, Laird and Simpson.

Byrd smacked a 3-wood shot 92 yards to four feet on his approach, but Stricker followed by dropping his approach three feet from the cup.

At 17, Stricker came up short on his approach and blasted a 71-foot putt four yards beyond the hole. Stricker left his putt on the lip of the cup and tapped in for par, then watched Byrd miss his putt to go three adrift.

Byrd took another bogey at 18 and Stricker finished with an eight-foot birdie to stretch his final victory margin.

Laird birdied five of the last seven holes but his charge was too little and too late, undone by bogeys on the eighth and 10th after having run off three birdies in a row starting at the third hole.

Simpson birdied 15 and 16 but could not close on Stricker, finishing with back-to-back pars.