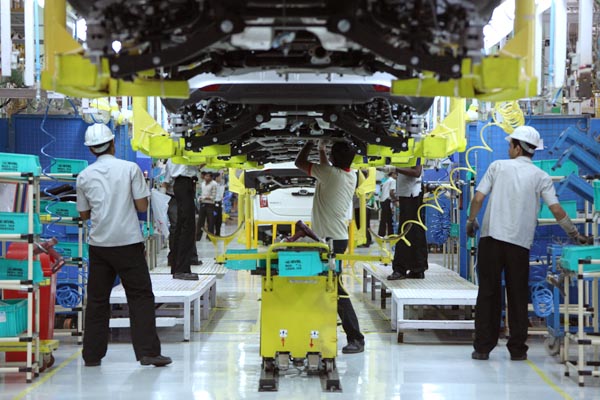 Mahindra workers assemble an XUV 500 sport utility vehicle at the company’s Chakan plant in Maharashtra on India’s west coast. Ssangyong’s Rexton SUV is expected to be manufactured at the same plant. Provided by Ssangyong Motor


CHAKAN, India - A new plant being built among farmland in the state of Maharashtra is shaping up as a litmus test to see if a Korean-Indian joint venture can succeed in the cut-throat world of automobile manufacturing by synergizing the strengths of both.

As excavators level the land on a vast site in Chakan, on India’s subtropical west coast, attention is focusing on whether the partnership between Mahindra & Mahindra and its Korean subsidiary, Ssangyong Motor, can live up to both sides’ lofty expectations.

The Chakan site is ground zero in the ongoing experiment to see whether the new alliance will eventually bear fruit, as this is where the Indian group’s vehicle manufacturing arm, Mahindra Vehicle Manufacturers, plans to start manufacturing the Rexton sport utility vehicle in the second half of this year.

One of the factories under construction will churn out chassis of the large sport utility vehicle, which was developed by Ssangyong Motor. The Korean automaker was acquired by Mahindra in late 2010 and the merger was completed last March. 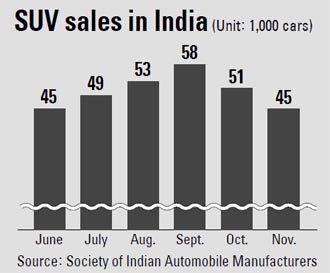 But the Rexton is not the only gift that lies in store for Indian drivers as the Indian conglomerate, which posted annual sales of $14.4 billion in the last fiscal year, also plans to roll out Ssangyong’s Korando C at the same plant next year. The vehicle, also an SUV, is available in Korea and China but will be another new entrant in India.

Mahindra commands 60 percent of India’s SUV market - a segment that accounts for 13 percent of the country’s auto market - but expects its new working arrangement with Ssangyong to give sales an additional lift.

The first plants at the 7-acre Chakan site were completed in March 2010. More are in the pipeline after the current one is finished, based on a total investment of 50 billion rupees ($956.7 million). The existing factories are capable of producing 300,000 vehicles a year, including heavy trucks, SUVs, excavators and other construction equipment.

Once built, the Rexton plant will see Ssangyong join a list of global automakers that operate in the area including Ford and Volkswagen.

Mahindra has bigger plans for its new subsidiary, which was dumped by its previous owner, Shanghai Automotive Industry Corporation (SAIC), after four years of unsuccessful marriage. At the time, the Chinese outfit was criticized by the Korean media for sucking technology out of Ssangyong before abandoning it.

However, its new Indian owner envisions more of a win-win result for both, according to Ssangyong Chairman Pawan Goenka, who doubles as the president of Mahindra’s automotive and farm equipment sectors.

He said the Indian parent is currently mulling options for its XUV 500, a midsize SUV, that will probably see it either exported to Korea or assembled there. The vehicle, which comes equipped with a 2.2-liter diesel engine that delivers 140 horsepower, was launched last September and named both Car of the Year and SUV of the Year in India. It retails for 1.1 million rupees ($21,040) before tax in India.

Goenka said the company has been conducting market research on the muscle-bound vehicle in Korea since last year to find out whether it is suitable for local consumers. Mahindra recently obtained Euro 5 emission standards certification from German licensor TUV, he added.

“We sent two XUV 500 vehicles to Korea to gauge customers’ response,” said B Bhaumik, senior vice president and head of product development at Mahindra’s auto division. He said the final decision will depend on the volume of anticipated sales.

Meanwhile, eyes are fastened on whether the merger with Ssangyong will pave the way for other collaborative partnerships down the road.

Ssangyong said it plans to export to India most of the components needed to assemble the Rexton. When Mahindra begins assembling the two SUVs, India is expected to become Ssangyong’s second-biggest export market.

Goenka said Ssangyong will be able to support its research and development efforts using proceeds from its own sales, as it has no debt.

But industry observers argue that Ssangyong’s survival depends on how many new products it can roll out and whether they succeed in the Korean market.

Furthermore, the subsidiary cannot lean heavily on Mahindra for technology because the parent company is less competitive in this area.

“Ssangyong’s future depends on how much it invests in research and development and how many new cars it launches,” said Kim Pil-soo, a professor at Daelim University College. “It has no other choice. That is the only way it can survive.”

“Mahindra is not advanced in terms of technology, so whatever technology Ssangyong possesses will eventually flow to Mahindra,” he added.

Regarding Ssangyong’s plan to export Rexton components for assembly in India, Kim said, “This will be a win-win situation. However, if Mahindra starts trying to do everything [in India], from components to assembly, it will be a different story.”

*Mahindra & Mahindra is a part of the Mahindra Group, which posted global sales of $14.4 billion in the last fiscal year. Mahindra has a presence in the automotive, agribusiness, aerospace, components and financial services industries, among others. It employs over 144,000 people in more than 100 countries.