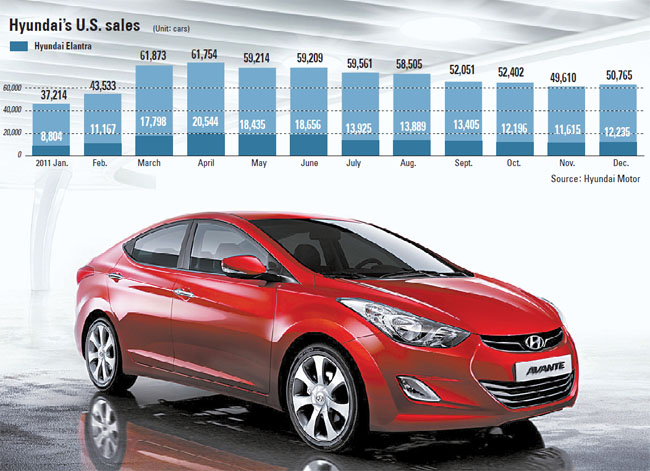 The Elantra is the 2012 Car of the Year according to the North American International Auto Show.


Hyundai Motor’s Elantra, also known as the Avante in Korea, was named the 2012 North American Car of the Year on Monday, beating out two chief rivals from Europe and the United States. The winner was announced at the North American International Auto Show in Detroit.

The award was handed out by a jury of 50 accredited independent automotive journalists from the U.S. and Canada based on an in-depth analysis of new car models including their quality, design, handling, safety and level of driver satisfaction.

The Elantra’s two main contenders were the Volkswagen Passat and Ford Focus. Also in the running were Hyundai’s Accent and the brand new Veloster. The last two did not make the list of finalists.

It is not the first time that Hyundai, the country’s largest automaker, has received such an award from the Detroit car show.

The Korean automaker picked up the same accolade in 2009 for its Genesis premium sedan, which helped upgrade its image in the U.S. to that of a more luxury brand. The release of its Azera sedan, called the Grandeur in Korea, further strengthened its image makeover. 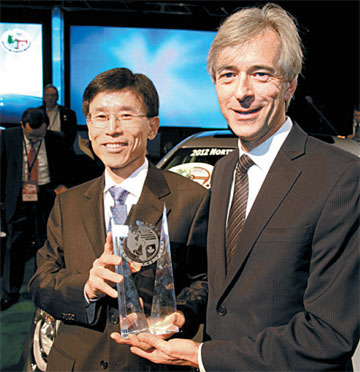 Previously, Mercedes Benz was the only non-American brand to have picked up the award twice. Of the 19 awards dished out in as many years, 10 have gone to U.S. automakers Chrysler, General Motors and Ford, while Mercedes, Volkswagen and Mini have shared four, and Toyota, Honda and Nissan one apiece.

The 2012 Elantra, which is produced in Alabama, has been well received in the U.S. market since it was released in late 2010.

Its best-selling model in the U.S. was the Sonata family sedan (225,961 sales), followed by the Elantra, the Santa Fe sport utility vehicle and the Accent.

According to Hyundai Motor, the Elantra has earned complimentary reviews for its fluidic sculpture design, fuel efficiency and price competitiveness amid rising oil prices and the souring economy.