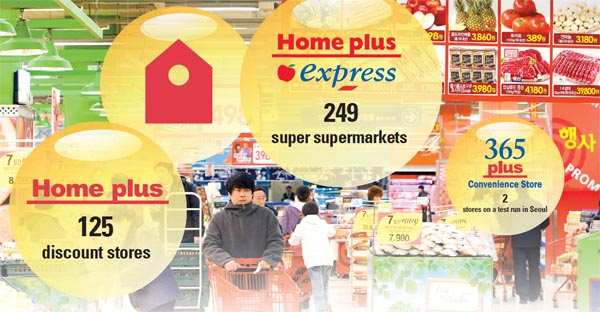 A recent law that prohibits large discount stores from operating between the hours of 11 p.m. and 8 a.m. is expected to cost Homeplus 1.2 trillion won ($1.03 billion) in monthly income, according to the Korea Chainstore Association.

The National Assembly’s Knowledge Economy Committee passed the revision bill in December to protect local mom-and-pop stores, but it is expected to hit the nation’s second-largest discount store the hardest as 70 of its 125 outlets operate around the clock.

But industry sources say Homeplus has shown great foresight by coming up with a way of softening the blow before the regulation was even passed.

In November, the Korean unit of British retail giant Tesco was authorized by the Fair Trade Commission to enter a new business field: convenience stores.

Industry sources suspect the retailer decided to enter this field to make up for the losses it will incur from the newly restricted business hours - a claim Homeplus denies as it battles criticism over the way in which it is moving to expand its field of operations.

Critics argue that the two convenience stores the retailer is test running are merely smaller versions of its so-called super supermarkets (SSM), as they sell fresh fruit, fish and vegetables unlike Family Mart, GS25 and other market leaders where people go to buy cigarettes, quick snacks and refreshments.

As such, they claim Homeplus is exploiting loopholes in the law by building small supermarkets that are masquerading as large convenience stores.

According to the Retail Industry Development Act, corporate-run supermarkets are banned from opening a new outlet within 1 kilometer (3,280 feet) of a traditional market or shopping district. It defines SSMs as outlets with a floor area spanning between 165 square meters (1,776 square feet) and 3,000 square meters, while existing convenience stores span an average of 76 square meters.

However, Homeplus’s Plus 365 Convenience Store in Daechi-dong, southern Seoul, operates a space of 130 square meters, allowing it to squeeze inside the more convenient retail bracket while measuring over twice the size of many of its rivals.

“Homeplus is rolling out de facto super supermarkets that are disguised as convenience stores after the government toughened the regulations regarding SSMs to reflect the public outcry over the threat these pose to mom-and-pop stores,” said Choi Seung-jae, secretary general of the Korea Federation of Retail Organization, which represents small retailers.

“Unlike SSMs, convenience stores are not affected by the Retail Industry Development Act. Homeplus is now trying to neutralize the law that was created to reconcile big business and small enterprises in difficult times.”

Homeplus spokesperson Caley Lim said the issue is being blown out of proportion and that the retailer is still in the process of experimenting with different kinds of outlets.

“The format of our convenience stores, including those that sell fresh groceries, has not yet been finalized. We are just testing various options to find out what kind of reaction we get from customers,” he said.

“Some people have criticized our 365 Plus Convenience Store as a kind of SSM in disguise, but that’s an exaggeration. Sometimes the stores sell fresh groceries, and sometimes they sell other items. This is part of our efforts to create an original identity for these new stores.”

Homeplus officials said the company expects to succeed in the convenience store industry despite its position as a latecomer due in part to the growing number of baby boomers who are retiring and looking for franchises to snap up as they bid to secure viable sources of income.

“Convenience stores are a good option for baby boomers as the industry is seeing double-digit growth every year,” said Lim, adding that detailed plans, such as when the first permanent store will be officially opened, are still being discussed.

Homeplus has been operating a second store on a test-run basis in Seorae Village, also in southern Seoul, since December.

The Korea Association of Convenience Stores predicts that the overall market will grow with Homeplus having thrown its hat in the ring. It forecasts that the number of convenience stores will grow to 24,100 and raise 11.1 trillion won in sales this year, up from 20,650 stores that raised a total of 9.9 trillion won in 2011.

For example, a bottle of Samdasoo, Nongshim’s popular brand of mineral water, costs 850 won at Family Mart and GS 25, but only 450 won at the new Homeplus outlet. For a carton of Shin Ramyun the price is 780 won at the established chains and 630 won at Homeplus.

Market observers have expressed concern about how its low-price policies will disturb the market and fair competition.

“If the prices of goods at convenience stores are lowered to match the level of SSMs, franchise owners will no doubt see their profits dwindle.”