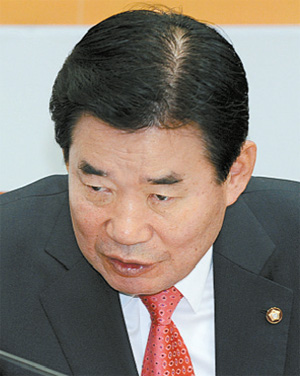 Kim Jin-pyo, floor leader of the Democratic Unity Party, presides over an emergency meeting yesterday to deal with rumors that one of its bigwigs made attempts to buy votes ahead of its upcoming chairmanship election. [NEWSIS]

The opposition Democratic Unity Party launched an internal investigation yesterday into rumors that one of its bigwigs made attempts to buy votes ahead of its upcoming chairmanship election.

Ahead of its leadership election on Sunday, rumors spread in the political arena that a candidate for chairman attempted to influence the party’s chapter heads in the Gyeongsang region by giving them cash.

The ruling Grand National Party has been rocked by a claim by one of its legislators that he received an envelope containing 3 million won ($2,600) in cash from current National Assembly Speaker Park Hee-tae for his vote during the 2008 chairmanship election of the party, which Park won. Park denies the allegation and is being investigated by prosecutors.

In a frantic effort to avoid a similar crisis, the DUP held an emergency meeting Monday afternoon and named Representative Hong Jae-hyong, vice speaker of the National Assembly, to look into the allegation. Hong is overseeing the election process.

Rumors spread Monday that a candidate in the DUP’s chairmanship race provided up to 5 million won in cash to chapter heads in South and North Gyeongsang provinces, Daegu, and Busan on the eve of the party’s primary on Dec. 26. The party chapter heads are influential with delegates to the primary.

“A tsunami is coming toward us,” said Representative Won Hye-young, co-chairman of the DUP. “We must lay bare the truth right now.”

Following the December primary, nine candidates are competing to be elected chairman of the largest liberal party ahead of April legislative elections and the presidential race in December. The winner of the most votes becomes chairman, and the next five candidates will sit on the party’s Supreme Council.

As speculations grew that Park was the candidate spreading the cash, Park declared himself innocent.

“I am not the lawmaker linked to the envelopes stuffed with cash over the chairmanship election,” Park posted on Twitter Monday. “I believe the truth will be revealed because the party is investigating the rumors. We must not have groundless attacks.”

In an interview with KBS radio yesterday, Park said it would be the best for the party to have a thorough investigation to lay bare the truth.

“I was told that if a candidate believes you are clearly on his side, he would offer a specific amount,” the head of a party chapter in Busan told the JoongAng Ilbo. Another head of a North Gyeongsang chapter said it is a long tradition that candidates provide money to the party chapter heads for operation fees.

Lim Nae-hyun, former head of the Gwangju High Prosecutors’ Office, led a team of investigators to Busan Monday on behalf of the party. Oh Jong-sik, spokesman of the DUP, said the party will lay out the truth before Sunday’s election. “If unlawful acts are proven true, we will disqualify the candidate and file all necessary legal and political measures.”

The internal probe, however, reported no progress as of yesterday afternoon. “We are checking on the rumors in Busan and South Gyeongsang,” Oh said. “I think we need more time.”

The Supreme Council of the DUP planned to hear a progress report yesterday morning, but the meeting was postponed as the investigators failed to obtain substantial results.

The rumors appeared to have poured cold water on the party’s effort to generate positive publicity from its leadership election. Launched in December through a merger of the Democratic Party, Roh Moo-hyun loyalists and civic activists, the DUP kicked off a five-day voting process Monday to choose its chairman. Aimed at boosting its popularity, the DUP invited the public to cast ballots through their mobile phones, and 643,353 people signed up.

The ruling GNP sneered at the DUP for having criticized it for the same irregularity and said the time has come for both the ruling and opposition parties to look back on the embarrassing politics of the past and cooperate to create a new political culture.