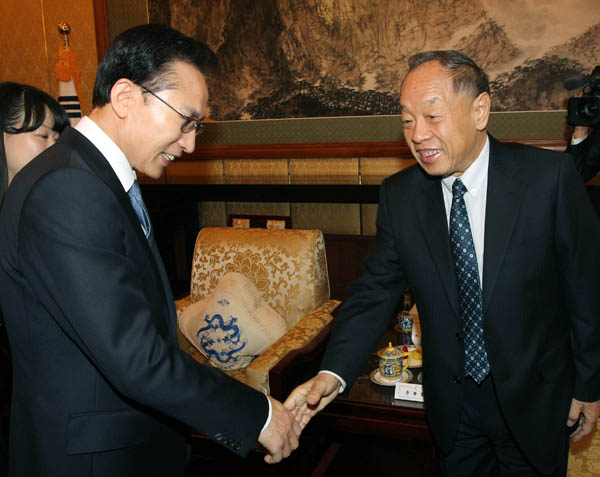 South Korean President Lee Myung-bak, left, had a meeting with former senior Chinese diplomats, including ex-Chinese foreign minister Li Zhaoxing, right, at the Diaoyutai State Guesthouse in Beijing, on the second day of his three-day state visit to China. Lee also held talks with Chinese Premier Wen Jiabao last night. The two leaders agreed to forge closer economic ties and reaffirmed their commitment to maintaining peace on the Korean Peninsula following the death of North Korean leader Kim Jong-il. According to a joint statement released by Lee’s office after the meeting with Wen, the two “shared the view that denuclearization of the Korean Peninsula as well as peace and stability are of paramount importance and agreed to continue to closely consult and cooperate with each other.” Chin, is economically close to South Korea, but is North Korea’s main benefactor and ideological ally. Also on the agenda for Lee’s visit to China was a discussion of how the nations can combat illegal Chinese fishing in South Korea’s exclusive economic zone. [YONHAP]