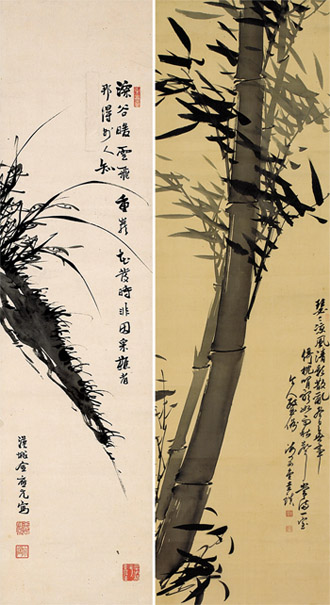 Hakgojae, one of the few galleries that displays art from the Joseon Dynasty (1392-1910) and contemporary works, is holding the “Orchid and Bamboo Paintings” exhibition featuring two artists who lived through the late Joseon era and the Japanese colonial period.

Gim Eung-won (1855-1921), one of the featured artists, was the follower of the style of Heungseon Daewongun, the father of King Gojong. Heungseon Daewongun was not only an ambitious politician but also an excellent painter of orchids.

“He was influenced by Heungseon Daewongun but also created his own style,” said Woo Chan-kyu, president of the gallery, during a press preview last Friday.

“There were many excellent artists in this period like these two, but they have hardly been in the spotlight,” Woo said.

He added that orchids have traditionally been used as a “metaphor for the life of gunja, or noble men, who cultivate themselves morally.” Bamboos symbolize gunja’s integrity as well as peace and stability.